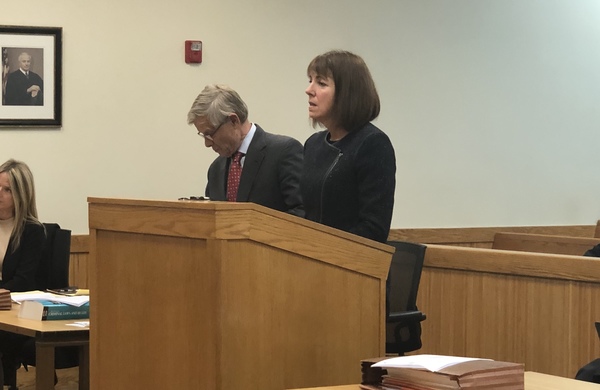 Former Livingston County Judge Theresa Brennan has pleaded guilty to perjury in exchange for two other criminal counts against her being dropped.

A plea bargain was struck Tuesday afternoon between Brennan and the state Attorney General’s office. Brennan pleaded guilty to a charge of perjury in exchange for two lesser charges- tampering with evidence and misconduct in office, being dropped. These charges stemmed from her 2016 divorce case and were a large focus of her October 2018 Michigan Judicial Tenure Commission hearing. Visiting Wayne County Circuit Court Judge Paul Cusick presided over the hearing held at the Livingston County Judicial Center. He asked Brennan if she indeed knowingly made false and misleading statements related to destroying evidence on her phone while under oath. Brennan had testified during her deposition that she was joking about those inquiries to staff, but, Tuesday, admitted that she was not. Brennan and her attorney declined to comment outside court.

The guilty plea will require her to notify the Michigan Attorney Grievance Commission of her criminal conviction. This may lead to future licensing sanctions, including disbarment. Brennan was a Livingston County judge for 14 years until she was removed in June by the Michigan Supreme Court.

Howell attorney Tom Kizer represented Brennan’s husband during the divorce proceedings and brought to light a presumed affair she had with former Michigan State Police Detective Sean Furlong, who was the chief witness in a 2013 double-murder case in which Brennan presided over. That conviction has since been withdrawn and a new trial for Jerome Kowalski is set to begin next month. Kizer, who has been a long-time critic of Brennan, said of the plea deal that was wasn’t surprised by it, nor elated. He called it a terrible day for justice when a judge can do the things that Brennan was accused of and then get a plea. Kizer said that he believes the only reason she entered the plea was because the evidence was overwhelming. He also believes it will be cathartic for the community as it will help "remove a stain on the community and judicial system."

A perjury charge carries a 15-year maximum sentence. However, based on state guidelines and Brennan being a first time offender, the Attorney General’s office is recommending 0-6 months of jail time under the sentencing agreement. Kizer, a former prosecuting attorney himself, said he didn’t believe this was a sweetheart deal and that it was a reasonable plea. He said for a first time offender, 15 years is pretty serious crime. Kizer added that he doesn’t think it’s necessary to put the public through the expense of a trial when a judge who committed perjury acknowledges and accepts to the perjury.

Michigan Attorney General Dana Nessel said in a release that Brennan “violated the very tenants we as a society hold dear: truth, honor, and justice. She made a mockery of her oath of office and undermined the integrity of the bench. I am confident Judge Cusick will sentence her appropriately.”