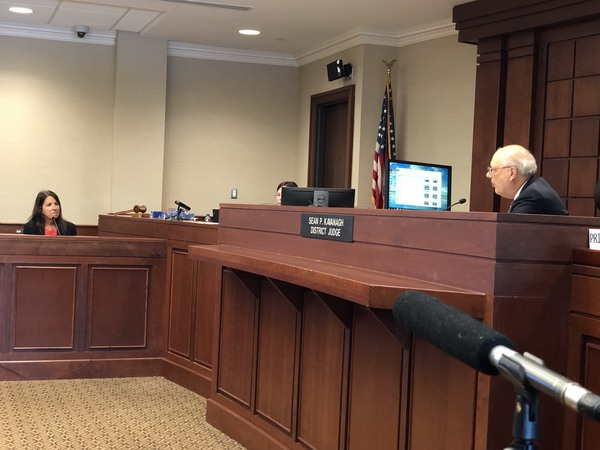 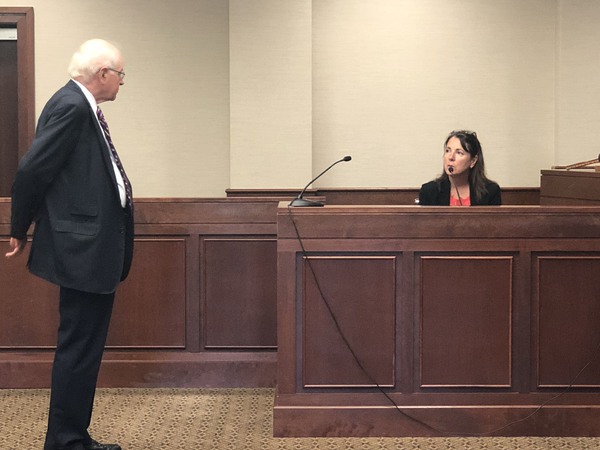 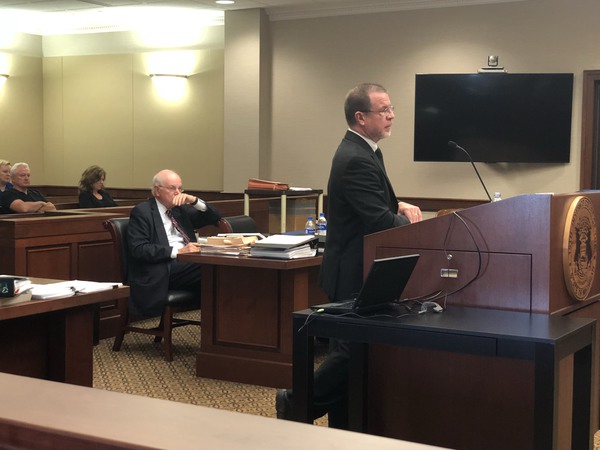 The first complaint hearing against 53rd District Court Judge Theresa Brennan by the Michigan Judicial Tenure Commission has come to a close.

Judge Brennan was on the stand for the 8th and final day of the hearing held at 16th District Court in Livonia, Wednesday. Her attorney, Dennis Kolenda, questioned her largely on her introduction to, and relationship with, Michigan State Police Detective Sean Furlong. The main issue in the JTC’s complaint is that very relationship. Furlong served as the chief prosecution witness in the 2013 double murder trial of Jerome Kowalski, which Brennan presided over. Brennan testified that she met Furlong in 2005, but they didn’t become friends until 2007 or 2008. She said it was “hard to pinpoint.”

She said that until the Kowalski trial had ended, they had never spent time alone. They would do things in groups or attend events together, but Brennan said she had no memory of it ever being just the two of them. At one point she mused on the stand during one question about possibly going to dinner just once as the two of them, but backed off of that when questioned by Special Master William Giavon, who presided over the hearing. Brennan said there was testimony of one officer seeing her and Furlong in a car together at a restaurant, but that they must have been waiting for someone.

Brennan testified that the last time she saw Furlong before the Kowalski trial was mid-December 2012. The trial began in early January 2013. The Friday before the trial, the Livingston County Prosecutor’s Office received a letter from Howell attorney Tom Kizer suggesting an inappropriate relationship between Brennan and Furlong. A meeting was held between Brennan, County Prosecutor Bill Vailliencourt, Assistant Prosecuting Attorney Pam Maas, and Kowalski’s defense lawyer Walter Piszczatowski. Brennan said she walked in to pained looks on the faces of Vailliencourt and Maas, with them telling her “Kizer was at it again.” Brennan said that Kizer has had it out for her since 2007 and has been reprimanded for inserting himself into her cases just to get her disqualified. Piszczatowski was concerned of a sexual relationship, she said, to which she replied they were nothing more than friends. She said, “We had not had sex, we had not kissed.” Brennan said she was already anxious for the trial, and was angry knowing what Kizer was trying to do. She said everything he had in the letter, he had held onto until just before it started. “If I wasn’t crying, I was fighting back tears,” she said.

During the trial, but before the verdict in March 2013, Brennan said she did not see Furlong, but talked to him twice on the phone. She thought she only called once, and he the other time, but records show she initiated both calls. When asked how long they talked, she said when you add it together it’s a long time. She testified to one of the calls where she and friends were at the airport on the way to see Barack Obama’s second inauguration. When their flight kept getting delayed, she said they started drinking, she was bored, and so she called. She said she didn’t remember what they talked about, but that it wouldn’t be about the trial.

Following the trial there was an emotional incident, or “psychological breakdown” in her office that a couple witnesses testified to earlier. Brennan said that Furlong came in and told her that they couldn’t be friends anymore. She said he told her that Kizer is still after her and will never give up; their being friends would destroy her career. Brennan said both she and he were sad. Kolenda asked if she was in love with Furlong that afternoon, before that afternoon, or if they were intimate at any point in the past from that moment. She said “no” to all three.

He asked if she did fall in love with him at some point. She said, yes, in 2014, after they began a sexual relationship. When asked if she is still in love, she said “That can’t be answered with yes or no.” They rarely see each other or talk anymore she said. “After this (JTC investigation) started happening, it was too difficult to maintain a friendship.”

JTC Executive Director Lynn Helland then got his opportunity to question Brennan. He asked if the 53rd District Court had a “Best of” tape collection of lawyers embarrassing themselves. Brennan said they did, that it was for events like retirement parties, and that she, herself, is on it.

Helland then asked Brennan about testimony that claimed she asked for help deleting information from a phone belonging to her then-husband Don Root. Root had a protection of evidence order put out during their divorce proceedings, on December 6, 2016. He then asked if she acknowledged that in the next 2 days, she asked around the office if anyone knew how to delete information from her phone. She said yes. No one on staff did, however. On December 8, 2016, Brennan got a new phone, transferring all info, and resetting the old to factory conditions. Helland asked her if she knew that was a crime, deleting information from a phone from a piece of evidence. She said she did not destroy evidence, that they “agree to disagree” on that, and that that is how she sees it. Helland produced a transcript from her divorce proceedings in which Kizer asked her in court, on the record, if she ever asked about getting info deleted from the phone, and if she reset the phone, to which she replied “no.” Brennan was accused of treating it like a joke before Kizer. She said she knew a forensic expert would be looking at it, but when she and Root settled, that was no longer necessary. The Michigan State Police investigated the phone before these hearings, and learned 2 weeks ago, that it had been reset. Helland asked when it was that she started changing her story on the phone. She began “It’s different…” then after a long pause, said she never intended to make Kizer’s job easy. She told Kolenda during later in the hearing that she did not intend to destroy information, and just transferred it to the new one.

Helland then questioned Brennan’s behavior and demeanor for a series of cases and testimonies earlier in the hearing. Video snippets were shown her being short with attorney Bruce Sage, possibly mocking him. Brennan responded that we were only seeing a small outtake of the case, which is still going on 3 years later, and that Sage was warned repeatedly about following orders. She denied mocking him.

She was asked about accusing attorney Carol Lathrop-Roberts of “forum shouting” when she told her client to call Kizer while being taken to lockup. Brennan reiterated that Kizer has been trying to destroy her professionally and that she saw, and still sees, Roberts inciting his name as a threat. Roberts testified that she was worried Brennan would put her in lockup, and had Kizer ready to represent her if that happened, because she would need a lawyer for herself.

Helland asked about her disputes of former court recorder and secretary Kristi Cox’s claims to have worked on 2014 campaign materials on county time. Brennan said Cox made a “huge exaggeration” of the work she did on documents.

Giovan asked Brennan about testifying that she went after the Pro-Choice endorsement in 2014 after being denied the Right to Life endorsement. Brennan said she reused a letter from old campaigns to pursue it. Being questioned further by Giovan, she admitted that RTL had never denied her because she never filled out the form, assuming they would.

With this hearing over, the JTC and defense are strongly considering a second, and most likely, 1-day hearing to question witnesses not ready for this hearing. If it occurs it will take place in Wayne County where Special Master William Giovan, who presided over this hearing, will be sitting as a visiting judge. Helland said that he may wish to amend the complaint to include things that have been litigated during this hearing. (MK)