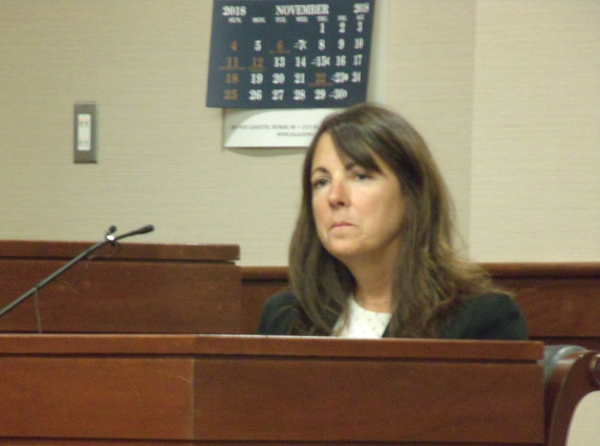 A Livingston County judge already facing allegations of misconduct has been charged with committing perjury and destroying evidence in her divorce case.

The attorney general's office filed charges Thursday against 53rd District Court Judge Theresa Brennan. State police say she lied during a deposition about erasing data from her iPhone shortly after her ex-husband filed for divorce in 2016. A message seeking comment was left with Brennan's attorney. It's not clear when she'll appear in court. Separately, Brennan is accused of unethical acts that could lead to her removal from the bench.

In response to the news, Livingston County's elected officials offered their thoughts. State Senator Joe Hune said, "While nothing can make up for the heartache that so many of our neighbors have had to endure while Theresa Brennan has been on the bench, I am happy that she may finally be held accountable for her misconduct. As we wait for the Judicial Tenure Commission decision on whether to further discipline or remove her from the bench, I again call for her to resign immediately. It is sad that this situation has come to this point, and all of us would have been better off had Brennan done the right thing and resigned her office a long time ago. Time’s up.” That sentiment was echoed by State Representative Lana Theis, who will replace Hune in January. "I’m glad to see that these charges have been filed,” said Theis, R-Brighton. “It is the beginning of ensuring that justice can be done. The good people of Livingston County should no longer be subjected to her shenanigans and frankly, criminal activity. This has gone on far too long and calls into question the decisions that were made in her court. I echo Senator Hune’s call for her to resign.” State Representative Hank Vaupel also added, "I appreciate the attorney general’s commitment to the pursuit of justice in filing these charges today against Theresa Brennan. If it weren’t evident before, it surely is now: Theresa Brennan must resign immediately. Time has long passed and the people of Livingston County deserve to have honesty, integrity and the rule of law restored to the district court bench.”

The Michigan Judicial Tenure Commission says Brennan used staff to perform personal services and failed to disclose a relationship with a police officer during a murder case. Former State Police Detective Sean Furlong was the chief prosecution witness in the 2013 murder trial of Jerome Kowalski, over which Brennan presided. Testimony and other evidence that came to light during Brennan’s divorce indicated the pair engaged in an affair before, during and after the trial. They have both denied that and said the affair began only after the trial was over.

A special master heard evidence in the case in October and will write an opinion. The Judicial Tenure Commission will then make a recommendation to the Michigan Supreme Court, which could result in her removal from the bench. (JK)