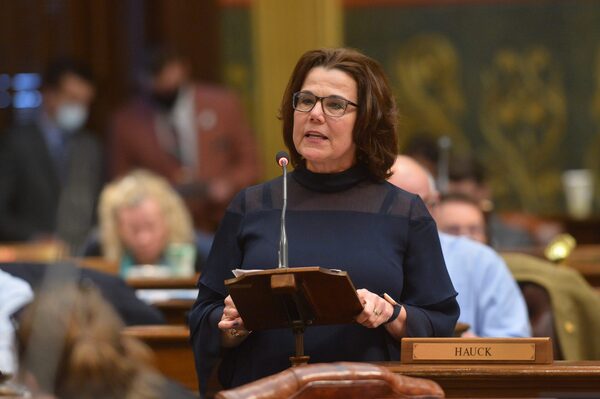 
The Republican-led Michigan Legislature on Thursday approved tougher voter ID requirements and a ban against mass mailing of unsolicited absentee ballot applications, finalizing bills that will be vetoed by Democratic Gov. Gretchen Whitmer.

“As legislators, we have an obligation to the people of this great state to ensure our laws create a strong, election framework,” Bollin said. “This plan will provide us with a path to ensure we have fair and free elections. It will help restore confidence in our elections. It will give people confidence that their vote will count. And that they, and only they, are casting their own ballot.”

The party-line votes in the House came shortly after several people in the gallery were escorted out for yelling in protest. A GOP group last week began circulating signatures for a similarly worded ballot petition that, if enough signatures are collected, could be enacted by Republican lawmakers without the governor’s signature.

The legislation headed to Whitmer would require voters who request an absentee ballot to write their driver’s license number, state ID number or the last four digits of their Social Security number. They currently sign the document, and the signature is checked against what is on file.

People who show up at the polls without a photo ID would no longer be able to sign an affidavit and cast a regular ballot. About 11,400, or 0.5%, of in-person voters did that in the 2020 election.

Instead, they would get a provisional ballot and have to verify their identity with the local clerk within six days of an election for their vote to count.

Democratic Secretary of State Jocelyn Benson last year mass mailed millions of unsolicited absentee ballot applications to voters who were not already on permanent lists, saying it was a way to encourage safe voting during the coronavirus pandemic. It was upheld in court but would be prohibited in the future under the main bill, which also would ban of the use private funds and in-kind contributions to help administer elections.

“They’re hideous, regressive, suppressive and discriminatory,” said Rep. Amos O’Neal, a Saginaw Democrat. “These bills chip away at the very foundation of our fundamental American rights.”

Rep. Steve Johnson, a Wayland Republican, said requiring an ID to vote is not suppression.

“It’s a way for us to make sure that we can actually trust these votes,” he said, noting the approval of a measure to eliminate a $10 fee to obtain or renew a state ID card. The fee already is waived for certain people, including the elderly, those on welfare or disability assistance, the homeless and veterans.

“We are now actually increasing the opportunity for people to vote,” he said. “No one wants to talk about that.”

Bollin, who served as Brighton Township’s clerk for 16 years before being elected to the House in 2018, concurred, saying that as a former clerk, she understood what is involved in administering elections.

“I can assure you we do have checks and balances in our elections, but I can also stand here and tell you there is room for improvement,” Bollin said. “It is time to come together – to restore confidence with our public – and protect the vote so every eligible voter can vote freely, secretly, independently, and securely. These bills will do just that.”

Critics, however, have said requiring additional information on absentee ballot applications would impose new barriers and sow confusion, particularly for the elderly and other voters. Like in-person voters, they too would be given a provisional ballot if they did not provide their driver’s license number, state ID number or the final four digits of their Social Security number.

“Their ballots would not be counted unless they jump through a series of hoops,” said Rep. Darrin Camilleri, a Trenton Democrat. “Michigan already has voter ID laws.”