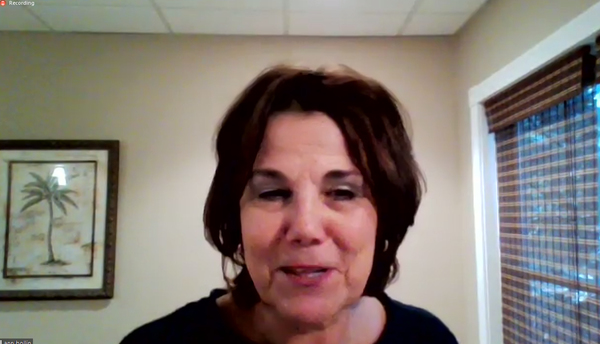 
Just days after a local lawmaker disclosed she had been diagnosed with COVID-19, she has reaffirmed that she will not support a mandatory mask order in Michigan.

Republican State Representative Ann Bollin of Brighton Township held a pair of online Coffee Hours this morning with constituents. The event had originally been planned to be in person, but was switched late last week after it had been reported that Bollin had contracted coronavirus. She confirmed her diagnosis later in the day.

Bollin discussed the latest stay-at-home order announced by Gov. Whitmer Sunday night, using an epidemic-powers law through the Michigan Department of Health & Human Services. The Democratic governor was forced to switch to that approach after the state Supreme Court ruled last month that her executive orders exceeded her legal authority.

The latest orders were quickly criticized by legislative Republicans, who complained that she was continuing to issue directives without their input. Whitmer says the new restrictions were necessary as COVID case counts and hospitalizations surge across all areas of the state and said she wants the Republican-led Legislature to codify a mask requirement in law to send a unified message. But during today’s coffee hour, Bollin said that was not something she was willing to compromise on. "I will not support a mask mandate to say everyone has to wear a mask. Masks are not appropriate for everybody and they're not appropriate in all situations. Everyone comes to the table with their own set of experiences and their skill set and their knowledge. I think if we could be a little bit more loving, respectful that we're all coming...everybody wants what's right and good for people in general, not just themselves. I still believe in humanity and people want the best for others and not just themselves."

Bollin says her preference is for a more regional approach that focuses on the most vulnerable groups in the population.

Bollin also answered questions concerning the counting of ballots at the TCF Center in Detroit. Democrat Joe Biden has been declared the unofficial winner of the state's 16 electoral votes based on tallies which show him with a more than 145,000 vote win over President Trump. Michigan was one of the states that helped put Biden over the top to become the President-Elect, although many Republicans continue to espouse unsubstantiated theories of vote rigging and election fraud. President Trump has refused to concede the election, and lawsuits seeking to overturn voting results have so far failed. In addition, 10th District Republican Congressman Paul Mitchell of Michigan acknowledged Monday morning that Trump had lost the election and said he should concede defeat for “the good of the nation.” Mitchell did not run for reelection.

I will keep trying this...@realDonaldTrump legal challenges alleging fraud have failed due to lack of evidence. Recounts may change numbers slightly - not enough to change the outcome. The good of this nation requires an effective transition. Let’s just deal with it.

Bollin steered clear of that particular issue, but said she has many questions about how the absentee voter process was handled at the TCF Center and plans to hold an online Election Integrity Town Hall, this Wednesday at 6pm. Bollin had earlier accused Secretary of State Jocelyn Benson and Gov. Gretchen Whitmer, both Democrats, of “hijacking our elections under the cloak of democracy and transparency and using COVID-19 as an excuse.”

At Monday's online Coffee Hour, Bollin was more focused on providing answers to constituents about the election process, explaining the county canvassing process that is currently underway to certify results at the local level and then send them to the State Board of Canvassers for final certification on November 23rd. However, she said that election integrity was her priority. "I have said for a very, very long time that we have a lot of checks and balances in Michigan election law but they are only as good as the administrator that is administrating the election. Once again we will have the opportunity to see what's gone awry and what hasn't, how to make sure we have more accountability in our laws and that's what I'm going to be focused on moving forward."