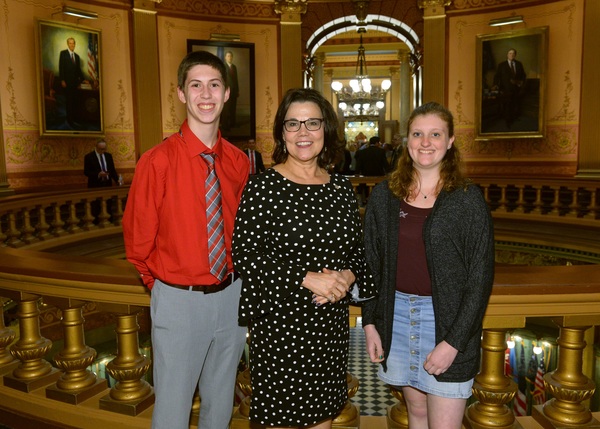 Legislation that aims to ensure minors and youth are unable to purchase e-cigarettes or possess vaping products has received support from a local lawmaker and area students.

State Representative Ann Bollin of Brighton Township on Wednesday voted in favor of a plan to ban the sale of e-cigarettes to minors and prevent individuals under 18 from possessing vaping products in Michigan. Bollin welcomed two Pinckney High School students to the House to watch the vote. The students, Kalie Alexander and Benjamin Welch, testified before a Senate committee earlier this year to advocate for the reforms. Bollin applauded the pair for standing up for an issue they believe in and taking action to become part of the solution.

Bollin says the number of teenagers who use e-cigarettes has increased dramatically over the past few years, drawing concern from parents, school administrators and law enforcement officers. She feels the “new way of smoking has become popular among young people” and that many incorrectly believe vaping nicotine is harmless.

Electronic cigarettes are battery-operated devices that deliver nicotine and flavoring without burning tobacco. In a recent study, one in five Michigan high school students reported having used an e-cigarette in the past 30 days. According to the Centers for Disease Control, vaping nicotine can harm adolescent brain development and lead to addiction. Many vaping products also contain diacetyl, which is commonly associated with “popcorn lung”; a condition that damages airways.

Senate Bills 106 and 155 received overwhelming support in the House and now head to Gov. Gretchen Whitmer for consideration. However, it is unclear whether she will sign the bills. A spokeswoman says Whitmer wants a “meaningful solution” to keep vaping products and e-cigarettes out of youth’s hands. The state Department of Health and Human Services says the legislation conflicts with federal regulations. Former Republican Gov. Rick Snyder vetoed similar bills, saying while he supported a teen e-cigarette ban, he also had concerns with excluding alternative nicotine products from the definition of tobacco.