Pinckney Board of Education Swears In New Members, Elects Officers 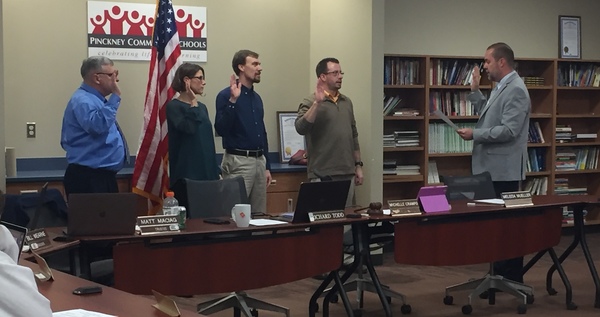 The Board of Education at their Thursday night meeting first voted to elect the board’s officers. Michelle Crampo was reappointed as President, Melissa Mueller will no longer be a trustee having been elected as Vice President, Bill Wearne was reappointed as Treasurer and Bethany Mohr was once again elected to serve as Secretary.

Superintendent Rick Todd then swore in all of the “new” board members who have joined within the last year, though they legally had already taken their oath when chosen for their seat. Those sworn in include Matt Maciag, who joined the board last January, Bill Wearne, who joined last May, Amanda Mortensen, who was elected in November, and James Velasco Sr., who was appointed to a vacant seat just last month.

At the meeting, Superintendent Rick Todd shared some ideas he has to help board members get to know one another better in hopes of fostering even more teamwork and efficiency among them. One of those activities would be a “district tour” in which the entire board would visit each of the district’s schools to observe and talk with staff members as a way for them to get to know the district’s leadership. (DK)