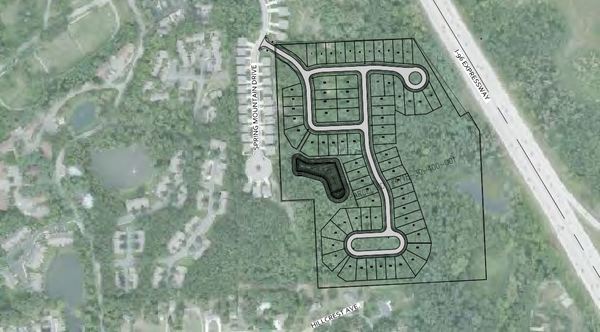 
Final approval has been granted for a large housing project in the City of Brighton.

The Brighton City Council met virtually Thursday and approved a PUD contract between the City and Pulte Homes for the Bluffs at Springhill development. The final site plan includes 70 single‐family home sites. The development is to be situated on a bluff between I-96 and the Hamilton Farms condominiums at Flint Road. About 2/3 of the 28-acre mostly wooded and hilly parcel will be clear-cut for site condominiums, which will be constructed by Pulte Homes.

The adjacent Spring Mountain Drive development previously had problems with drainage, erosion, flooding, and damage to some foundations, and that, in turn, led to a lawsuit against the original developers and a court order to take corrective action. Those residents have more recently expressed concerns that the Bluffs at Spring Hill will result in similar problems. Developers have assured residents and the city that their concerns will be addressed. The City utilizes a standardized document for the PUD contract and a memo states it was successfully used for negotiating and approving the most recent PUD rezonings, which were the Second Street Flats and the Brighton Square development.

The only significant change made was said to be to the construction work schedule. It states construction of site infrastructure improvements shall commence within twelve months of final approvals and shall occur in one phase.

At the May City Council meeting, a public hearing was held and final approval of the PUD rezoning/site plan was granted. The Planning Commission met this week and approved the contract so Thursday’s night approval was the final needed.