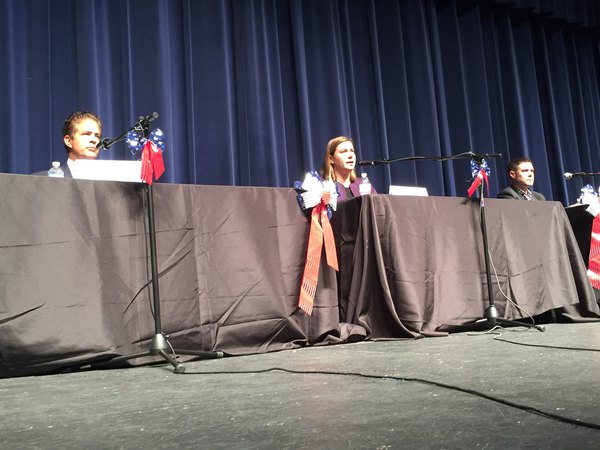 The first question the candidates were asked was what three people or Political Action Committees (PACs) have contributed the most to your campaign and what do you think they expect for their money. For Ellison, that appeared to be an easy question to answer stating, “The three biggest PACs that have donated to me are nothing, nothing and nothing. The biggest contributor to my campaign is myself and what I think I offer myself is that I am the best representative to represent all of the people in this room. I don’t have any special interests that’s given me any money. There’s a reason for that and it’s because I’m not beholden to anybody and I refuse to be beholden to anybody.”

Slotkin was next to answer, first noting that she believes one of the biggest differences between her and Bishop is accepting PAC contributions. She then shared examples of some of her smaller donation sources. Slotkin says, “The donations that I have come from people like Nick, who just wrote me a letter. He’s a retired cop in Rochester. It’s his first political donation because he believes in his bones that our politics right now are fundamentally unbecoming of the country he believes in. Or like Helen, who I think is here tonight from Howell, who gave me $15. That’s not the same as a special interest.”

Bishop insisted he had nothing to hide when it came to campaign donations, and took aim at Slotkin’s own campaign finances saying, “I have been accused of taking money, contributions. I would just tell all of you if you’d like to go to the FEC report, it’s online. I’m open and transparent. Everything I’ve accepted is online.”

Another question that drew heated responses was on the issue of Medicare for All, a legislative priority of Senator Bernie Sanders that would essentially create a single-payer health care system. Ellison said he was flat-out against such a system and reiterated his position for a free-market system. Slotkin was next to answer and took immediate aim at Bishop. "I do not believe in Medicare For All. Mr. Bishop has ads to the contrary. The Detroit Free Press and lots of other sources have called those claims false…There is a big, big seam between Mike Bishop and I and that is on protecting people with pre-existing conditions. And it’s important to review the bidding on this. In 2015, Mr. Bishop voted for a full repeal of the ACA. That means he wanted to make it fine and allowable for healthcare companies to prevent and say no to giving health insurance to one-third of the resident in his district…Fast forward two years later, it’s not so popular to say we’re going to deny coverage to people with pre-existing conditions. So he changes and votes for a bill that says, sure you can have health insurance--but we’re not going to protect you against price gouging.”

Bishop followed up with own attack on Slotkin's position. "I not only believe in protecting people with pre-exisiting conditions but I voted for it five times; three times when I was in the Michigan legislature before the ACA even came around…Since I’ve been in Congress I will admit I’ve done everything in my power to try to fix health care in this country. It is a mess…But now my opponent, Ms. Slotkin, wants to double down on government-provided health care. And I don’t care what you call it. It may not be government for all, but it’s a buy in, or whatever it is. It’s a bunch of mumbo jumbo. It’s the same thing. It’s government-run health care.”

One question that drew outcries from the audience following heated responses from the candidates was “If you could ensure the passage or repeal of one piece of legislation what would it be?” Slotkin, the first to answer, says she is part of a small group of candidates that got over 100 other candidates involved to write a letter to Democrat leaders, which speaks directly to what piece of legislation she seeks to change. Slotkin says, “If we flip the house, the first bill of the new Congress should be campaign finance reform because no matter what you’re working on, no matter what you care about, if our politicians are bought and sold, they’re not going to be advocating for the issues we care about.”

After Slotkin discussed campaign finance, Bishop addressed legislation about finances within the government’s budget. Bishop says, “I think the most important thing that we can do right now as a country is pass a balanced budget amendment and require that our country live within its means and not run up a $21 trillion dollar debt.”

Before answering, Ellison called out Slotkin and Bishop, saying Slotkin has received more money than anyone else on the stage yet wants campaign finance reform, and that Bishop voted for an increase in spending that contributed to the deficit, yet wants a balanced budget. For Ellison, he says the legislation he’d like to enact stems from a personal perspective. “We’ve been at war for 17 years…being a veteran myself and having spent a year in Iraq back in 2004/2005, and seeing the harm that we did while we were over there, the harm to the people there and the harm to our veterans…If I could pass one thing I would pass a bill that would bring our troops home. Enough is enough. We’re not accomplishing anything. We can pretend to be accomplishing things, we can pretend our troops are heroes which, as well-intentioned as they are, they’re not doing anything to protect our freedom.”

The candidates also spoke to issues including immigration, climate change, Medicare and the state’s infrastructure. The various forums were live-streamed by the League of Women Voters and you'll find a link to that below. (DK)