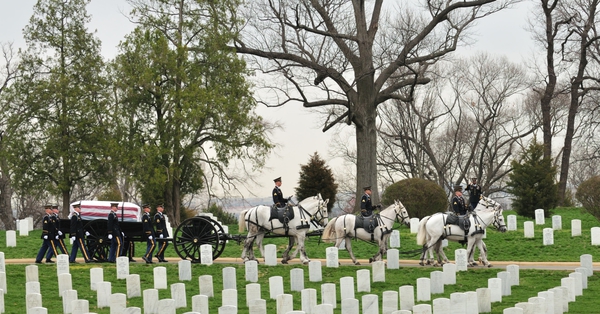 On Monday, the Rochester Hills Republican, along with fellow Republican Sam Johnson of Texas and Minnesota Democrat Tim Walz, announced the introduction of the bipartisan Full Military Honors Act of 2018 that would allow enlisted Medal of Honor recipients and Prisoners of War who are eligible for burial at Arlington National Cemetery to receive a full military honors burial, which includes an escort platoon, a military band, and a horse drawn casket if available. Currently, full military honors are reserved solely for commissioned officers, warrant officers, and senior non-commissioned officers.

Congressman Johnson, a 29-year U.S. Air Force veteran, was a POW for seven years in the infamous “Hanoi Hilton” prison after being shot down over North Vietnam in 1966. He said rank should not be a barrier for appropriate honors to those who, “honorably demonstrated the utmost patriotism.” Congressman Walz, a 24-year veteran of the Army National Guard, is the Ranking Member of the House Committee on Veterans’ Affairs and is the highest ranking enlisted soldier ever to serve in Congress. He urged passage of the legislation, “To help ensure we honor the sacrifices these heroes and their families have made for our country.”

Congressman Bishop said he was “shocked” to learn earlier this year that a former Korean War POW from Michigan, Army Pvt. 1st Class Robert Fletcher, was denied a full honors burial at Arlington National Cemetery based solely on his enlisted rank. Bishop said his legislation, “will ensure those who have gone above and beyond the call of duty are provided the full military honors they have earned for their end of life ceremonies.”

The Full Military Honors Act of 2018 has been endorsed by a variety of veteran organizations including the American Legion, Paralyzed Veterans of America, Military Officers Association of America, National League of POW/ MIA Families, Special Operations Association, Special Forces Association, and American Fallen Warriors Memorial Foundation. It has been referred to the House Committee on Armed Services for consideration. (JK)