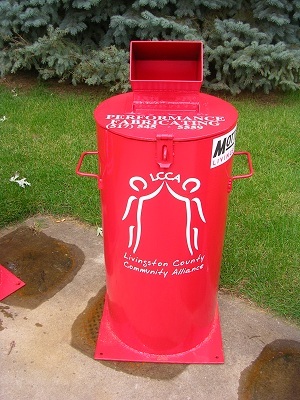 A special event is coming up for local residents wishing to properly dispose of unused medications and needles.

The Big Red Barrel will be at Genoa Township Hall on Dorr Road on Saturday, October 26th, from 10am to 2pm. The Big Red Barrel is a drop-off point for unwanted or expired prescription drugs to keep them out of reach of those who might abuse them, while also disposing of them in an environmentally-safe manner.

According to the Michigan Department of Education, nearly 13 percent of Livingston County youths have abused prescription drugs and painkillers in the past 30 days; a rate higher than the national average. The FDA has recently released a study on the harmful effects of medications that are flushed or dumped into the environment. The Red Barrel project is designed to combat both these issues by collecting and disposing of unused medications in a bathroom cabinet through the drug takeback program.

Controlled substances and all other solid dosage medications are accepted with no questions asked; however, those dropping items off are asked not to bring pill containers or other identifying information like labels. Liquid medication will be accepted if stuffed into a ziplock bag with enough paper towels to absorb all the liquid. The Drain Commissioner's office will also be on-site to collect sharps and needles. Inhalers will not be accepted. Identification is not required and there is no cost for the disposal.

Saturday is also National Prescription Drug Take-Back Day, with drop-off sites at the Livingston County Sheriff’s Office and State Police Post in Brighton along with the Brighton, Howell, Fenton and South Lyon Police departments. However, unlike the Genoa Township drop-off they cannot accept sharps or needles nor liquids or inhalers. More information about Saturday’s events is available below. (DK/JK)