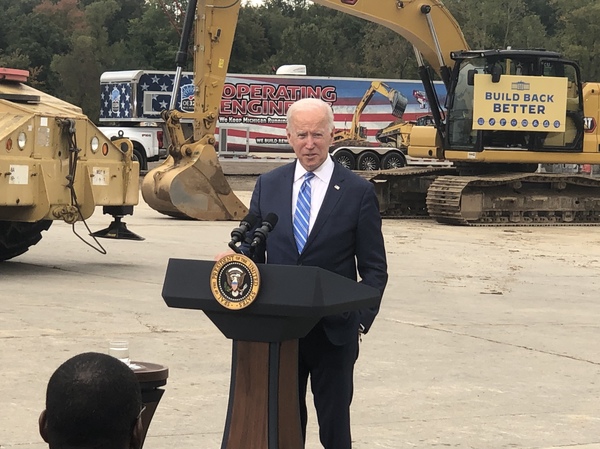 
Calling opponents of his plans “complicit in America’s decline,” President Joe Biden made the case Tuesday in Livingston County for his ambitious building and social spending proposals by framing them as key to America’s global competitiveness and future success.

With his plans in jeopardy on Capitol Hill, Biden visited the Operating Engineer’s Local 324 training center in Howell Township, declaring that he wanted to “set some things straight” about his agenda and cut through what he dismissed as “noise” in Washington.

“America’s still the largest economy in the world, we still have the most productive workers and the most innovative minds in the world, but we’re at risk of losing our edge as a nation,” he said.

Biden went on to spell out his plans in greater detail than he has in some time, after spending the past week deep in the details of negotiations on Capitol Hill. He highlighted popular individual parts of the plan, including funding for early childhood education and investments to combat climate change, rather than the expensive topline. And he emphasized that the trillions in spending would be drawn out over a decade and paid for by tax increases on corporations and the wealthiest Americans.

Polling suggests that elements in the bill such as expanded child care opportunities and infrastructure projects are popular with large parts of the public. But even some of the White House’s closest allies have worried that the West Wing has not done enough to sell the spending. That brought Biden back on the road Tuesday, hitting the red-leaning 8th District of Democratic Rep. Elissa Slotkin to sell his policies.

The president was joined by Slotkin during the visit to the union training center, a reflection of the importance of securing moderates’ votes. Biden, she said, understands “that if we’re going to make these investments we have to be able to pay for them.”

The visit to Slotkin’s district, narrowly carried by Republican Donald Trump in 2020, is part of an effort to sell plan to American voters. Although the crowd that greeted Biden wasn’t ready to listen to any message he had.

Hundreds of flag-waving, sign-toting protesters lined M-59 as he arrived at the union training center in Howell.

“I think this is very reflective of how residents, not only here in Livingston County, but real Americans, when you leave the Washington, D.C., bubble, feel about the out-of-control spending between our president and Congress,” said Meghan Reckling, chair of the county Republican Party.

Reckling said 800 people signed up to attend a “Stop the Spending Rally.”

The president is trying to give moderates like Slotkin cover for their support for his spending package.

While Slotkin backs the bipartisan $1 trillion infrastructure bill that has passed the Senate, she prefers passing it in the House before negotiating the broader $3.5 trillion package of social programs. She has indicated that she may vote to approve the broader bill sooner if it is fiscally responsible and can make a difference for families, her aides said, but she is not a guaranteed yes — which she planned to tell Biden on Tuesday.

“To be honest, it was hard for me to understand why leadership decided in the first place to tie the two bills together,” Slotkin recently told The Detroit News. “That’s not how we normally operate. It’s not my preference.”

While progressives and moderates grapple over the contours and the topline number for the $3.5 trillion social spending package, Biden has sought to reframe the debate around the eye-popping number. He contends that because the spending is to be paid for with tax hikes on corporations and the wealthy — those earning beyond $400,000 a year, or $450,000 for couples — the price tag of the bill is actually “zero.”