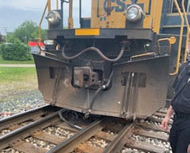 A bicyclist was hit by train in the City of South Lyon.

The South Lyon Fire Department was dispatched at 4pm Tuesday to a reported bicyclist hit by a train on 10 Mile near Reynoldsweet Parkway on the railroad tracks. Fire Chief Robert Vogel says they arrived with South Lyon Police and found a man who had been hit by a train. He says the man was able to talk however, he received significant injuries to his body and extremities. Vogel says the train was traveling less than 15 miles per hour when it hit the bicyclist. He says the patient was taken to Novi Ascension Providence Hospital by Huron Valley Ambulance. His current condition is unknown.

The South Lyon Police Department and CSX Railroad are investigating the accident. (JM)