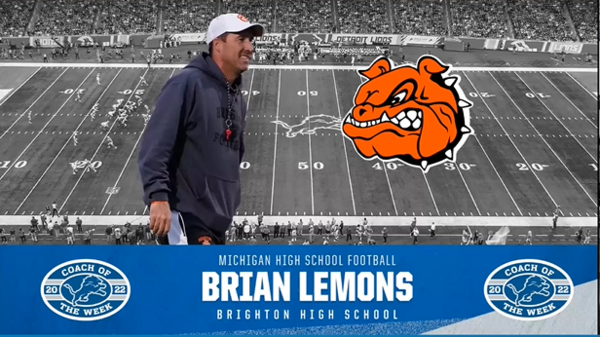 Lemons is the week eight recipient of the 2022 program. Lemons’ Bulldogs won their 8th game in a row over the Howell Highlanders 21-6 to move to 8-0 on the season. Brighton is currently ranked 8th in Division 1.

This Saturday, the Bulldogs will host the defending Division 1 State Champion Belleville Tigers in a battle of unbeatens in the KLAA crossover game.

Lemons is currently in his 8th season as head coach at Brighton and 25th season overall. Lemons has an overall career record of 112-43 (72.3%) and a record of 54-24 (69.2%) at Brighton. This season will be the 6th season Lemons has led Brighton to the MHSAA state playoffs with the highpoint of having directed the Bulldogs to a Division 1 state finals appearance in 2019.

Each week throughout the 2022 high school football regular season, one coach that best demonstrates success on and off the field, develops players’ character, discipline, and football skill in addition to emphasizing player health and safety in their program, is recognized for his commitment to the team, school, and community. The winner is selected by a panel of high school football media members.

This season’s program will award $12,000 to aid in the development and promotion of high school football in the state of Michigan, thanks to contributions from the Detroit Lions and the NFL Foundation. Each winning coach during the regular season receives a $1,000 donation to his school’s football program.

At the conclusion of the 2022 season, the Lions will also select the High School Football Coach of the Year. This season’s Coach of the Year will receive a $2,000 donation to his school’s football program.

A press release and link to a video interview with Lemons is provided.