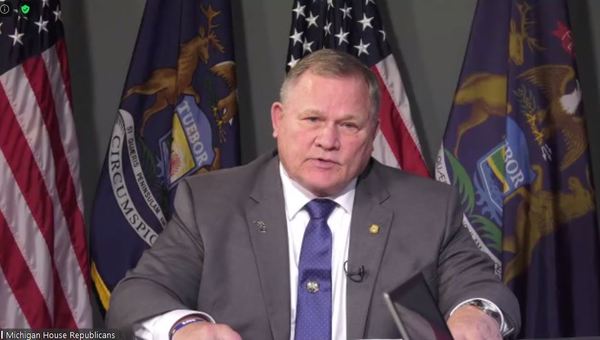 
State Representative Bob Bezotte talked with leaders of the local Human Services Collaborative and provided a legislative update during his recent office hours.

The 47th District Republican from Marion Township hosted the session last Friday afternoon over Zoom. He was joined by two members of the Livingston County Human Services Collaborative: Chairwoman Anita Gibson and Coordinator Amy Johnston. They gave an overview of the network of agencies that advocate for residents in several different ways. This may be from food or housing assistance, to mental health help, to working with foster kids to helping people with substance use disorders. Bezotte then gave a legislative update and took questions from residents.

Bezotte said that coming out of the pandemic, the need for many of these groups will likely become greater, especially with many children having been kept home and the potential for child abuse. Talking with law enforcement, the former Livingston County sheriff said he knows that drug abuse and suicides have been up.

Bezotte also took questions from constituents. He talked about the need to bringing and making broadband internet accessible, especially in rural parts of the county, like Fowlerville. He said progress is being made, including interesting talks with the railroads for potential legislation that would allow utilities to go under their tracks. Bezotte also addressed election security and encouraged residents to stay engaged with the system. Several GOP-backed bills making their way through the legislature have been broadly criticized by Democrats as being designed to disenfranchise voters. Bezotte strongly disputed that. “If you read these bills, it’s common-sense legislation. It’s one vote, one person. It’s verification and that’s what we all want. We want verification that your vote that that person is there. Illegal immigration is a hot topic obviously and what I worry about is illegal immigrants voting and in my opinion being from law enforcement, they don’t have a right to vote until they become an American.”

There is no evidence of mass voter fraud, either involving illegal immigrants or otherwise, in the 2020 election.

Bezotte also addressed a resident concerned about an agenda being pushed to test unvaccinated children bi-weekly in schools when they return. He said everyone should have the right to make a choice on vaccinating and that goes for parents with their children.