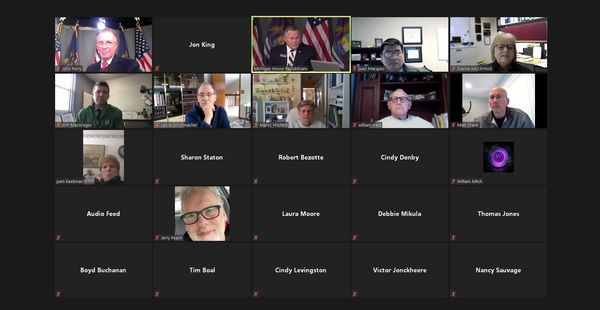 He said he’s taken dozens and dozens of calls from frustrated seniors, while expressing his own frustration at the CDC’s Social Vulnerability Index that the state has begun using to determine allocation numbers. He pointed to being put in the same high-risk MI Safe Start District with Oakland, Wayne and Macomb counties last year. Bezotte said they didn’t agree with it, but went along, with it affecting small businesses and schools. Now the county is being told there are 83rd in distribution, despite being 11th in senior citizens. Bezotee said that “common sense approach to distribution" isn't working.


When asked if there was a policy about getting vaccinated outside of the county, Director McCormick said there isn’t, but if you travel to get your first dose in Michigan, you need to get your second dose at the same place. One problem she said they are working to accommodate is that some snow birds have gotten a first dose elsewhere, like in Florida, and now have returned home and need their second.

Dr. Marquez said there is great promise for the one-dose Johnson &Johnson vaccine coming down the pipeline, and even if its efficacy tests lower than Phizer and Moderna, getting it out to the larger population will be quite effective. The health department is slated to receive 1,500 first doses next week following the 900 from this past week, leading McCormick to say we’re going in the right direction.

A question was asked about last minute cancellations when a vaccine is scheduled. McCormick said no vaccine is wasted and that clinic managers have a list of individuals like a police officer or urgent care worker that they can call and have come in on short notice.

Howell Public Schools Superintendent Erin MacGregor was one of his special guests, and said he is excited to see co-curricular activities, sports, and clubs starting up again over the past couple weeks. He said it’s been a team effort and credited their partnership with the health department for helping keep schools open.

Bezotte was asked about his goals during his first term, and he expressed a desire to address mental health care. As a veteran and a former sheriff, he said he understands the mental issues many other veterans, public safety workers, and inmates carry and wants to help. Bezotte represents the western side of Livingston County where he said broadband internet needs have to be addressed. He also said he is working on a bill with regards to the intimidation of police officers at events. Bezotte said he welcomes a peaceful protest, but depending on the political climate of the area, people who get into officers’ faces and are trying to get them to react negatively needs to be addressed. Finally, he said he wants to look into why COVID patients were put into nursing homes. He said, politics aside, that was a horrible decision, and was interested in having a commission set up to look into it.