Bench Made From Cemetery's Oak Tree Donated To City Of Brighton 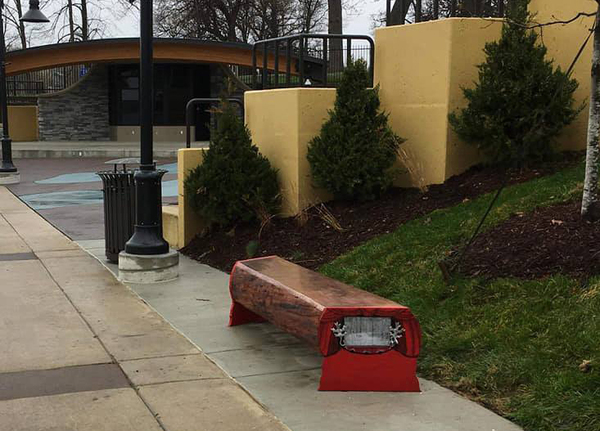 A bench that is in reality a piece of artwork has been donated to the city of Brighton for the new AMP - the concrete amphitheater and band shell that were constructed to replace the former, mostly grass amphitheater and plain wood gazebo on the Mill Pond.

The decorative bench has been donated to the city by the Brighton 150th Anniversary Committee. The bench was designed and built by James Roth of Hell Creek Forge and Kelly Become of Center Street Studios and was paid for with leftover funds after the committee reimbursed the Principal Shopping District $4,000 the organization had lent to the committee to get the celebration off on its feet. The funds were raised by sales and sponsorships of commemorative T-shirts and Brightonopoly games.

When one of the old oak trees next to the Old Village Cemetery was removed during construction of the Amphitheater, the committee found a way to bring it back home to the Mill Pond by using some of the lumber in the construction of the bench. On each side are 3D paintings of the scene from the past from where the viewer is standing. A plaque is being made for the bench and will be unveiled and formally dedicated in late June when it’s completed.

Inscribed on it will be the words “I used to shade you, now I seat you. Retire here with me as we reflect over the 150 years of Brighton 1907-2017 - Brighton Sesquicentennial”. (TT)