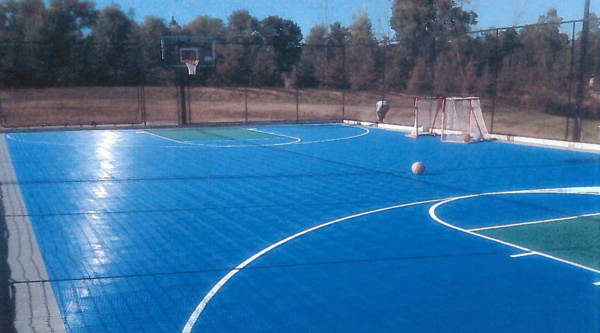 Plans are moving forward for a proposed basketball court at Genoa Township Park.

The court would serve as a multi-purpose amenity so that, in addition to basketball, it could be used for tennis, volleyball and roller hockey. The township’s Board of Trustees met Monday and viewed renderings provided by Township Manager Michael Archinal that gave trustees an idea of what the court could ultimately look like or look similar to. Archinal says the court has been proposed for the park’s lower lot because of its proximity to parking and the minimal amount of site preparation required. He noted that he also likes the fact that the facility would be more removed from the park’s playground and soccer fields, so it would provide separation for the different age groups using the facilities.

A very early estimate of the project cost falls around $73,000. Board members were mostly in agreement with the concept, but felt they could save on project costs by eliminating variables like lighting since it wouldn’t be necessary during the season when the court would likely be most in use, that being the summertime.

Based on a general notion of support from trustees, Archinal says he’ll come back to the board with a revised proposal to prepare construction documents and put the project out for bid. In discussing the project with contractors, Archinal says they think they can get the work done quickly and he hopes to have it completed this construction season. (DK)