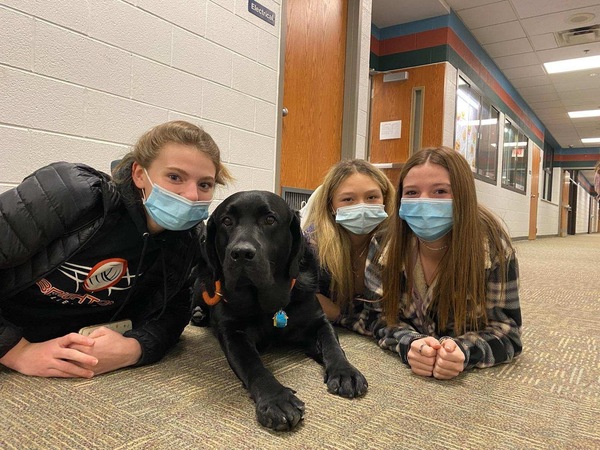 
Ford - one of the Brighton Area School District’s 12 social-emotional-learning dogs — is resting at home after surgery last month for a torn ligament, which is equivalent to an ACL tear in his knee. The surgery was performed by Oakland Veterinary Referral Services in Bloomfield Twp., which donated the surgical procedure and waived all related charges.

It was for that reason that the Brighton Board of Education named the veterinary practice a “Shining Star” at its March 22nd meeting and accepted the donation of $3,900 in veterinary services. Karen Storey, whose idea it was to start the “Pack of Dogs” program and who is its founder, says, “They jumped right on board to help Ford out. They knew first-hand the value that our dogs bring to the children’s and staff’s social and emotional well-being.” Storey adds that Dr. Kristin Wilson of the Arbor Hills Animal Clinic in Ann Arbor provides routine care for the dogs at no cost. Her husband is former Scranton principal Mark Wilson.

Ford, who is now 3 1/2 years old, is one of a dozen trained dogs owned by the Brighton Area Schools. Caesar, the very first such dog in the district, is now retired. The program, begun in 2009 with Caesar’s arrival, has been an unqualified success.

As far as is known, Brighton is the only school district in the US that has a therapy dog in each district school and in which the school district owns the dogs. Ford, assigned to Scranton Middle School, is currently living with teacher Meg Foley and her husband, Todd Knuth, his “home” family, while he recuperates from the surgery. The family takes care of Ford when he is not at school — including weekends, winter and spring break, and during summer vacation.

Ford has been in the school district since November of 2018 after he was purchased as a puppy from a dog training facility near Goodrich and underwent about a year of training. One might wonder how he got his unusual name, which has nothing to do with the car brand. Ford was named by his primary sponsor, the Ditto family, in honor of Deb Ditto’s father, Andrew Ford, who was a big supporter of the Brighton Area Schools.

The value of having the dogs in the classroom is not lost on the students. Scranton 8th grader Matthew Daniels says it makes him “happy to visit Ford and pet him in the hallway between classes,” while 7th grader Duncan McIntyre says Ford “is sweet, generous and honest,” adding he helps him with math just by watching him. And 7th grader Ian Dempster says Ford “is cute, nice, and kind, and he makes people happy.”

Due to the success of its program, many school districts have emulated - and sought the assistance of - the Brighton Area Schools in starting a therapy dog program of their own (see list below).

Storey says she and the district are indebted to area residents and companies for their support, without which they wouldn’t have a therapy dog program. Storey says she is “extremely grateful that (the Pack of Dogs) have the support from many businesses and families, from not only Livingston County but from many other counties in Michigan.”


List of the Brighton Area Schools’ Pack of Dogs and where they are assigned: