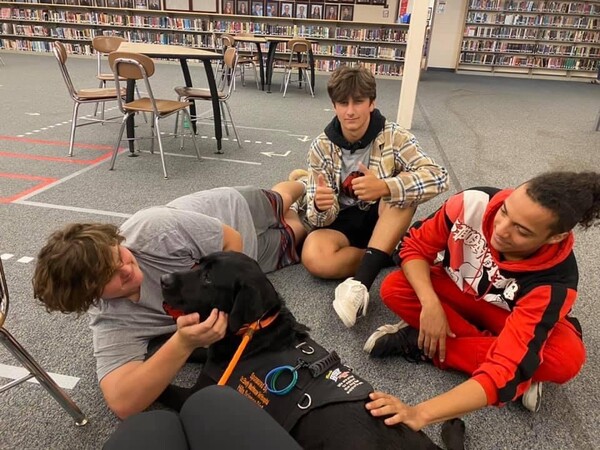 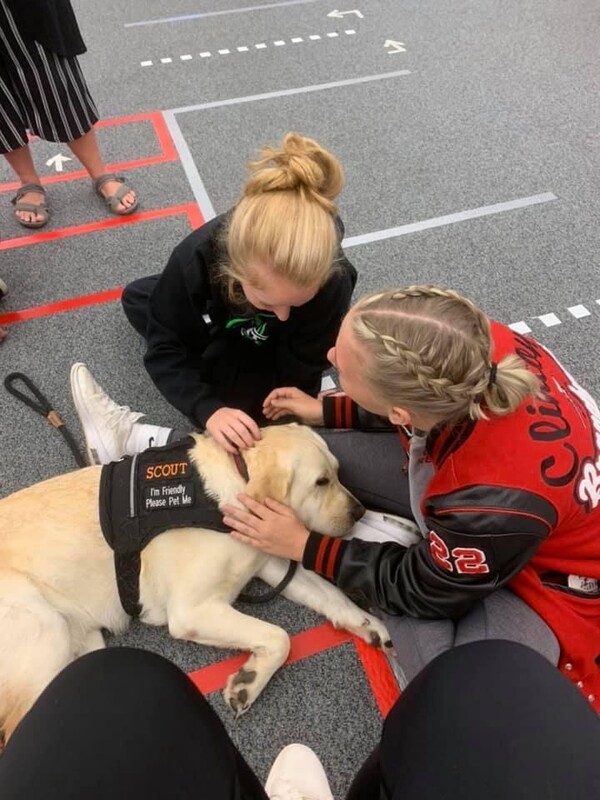 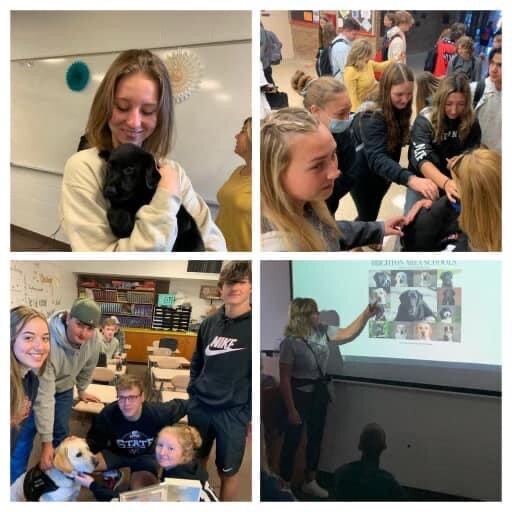 
Students and staff in the Clinton Community Schools District, who had recently been struck by a tragedy involving four students, got a welcome visit late last month from the Brighton Area Schools’ Pack of Dogs. The dogs are specially trained social-emotional-learning dogs owned by the school district - 12 in all, including at least one for every school.

The Clinton school district is a small one, the high school having just 380 students and 25 staff. As such, an accident that claimed the lives of two high school seniors and seriously injured two others left a deep emotional scar on the entire student body and staff. The accident occurred on Sept. 20th when a sport utility vehicle went off the road in northern Lenawee County, hit a large boulder and rolled over several times. All four male occupants were 17-year-old Clinton High School seniors.

Clinton High School counselor Heide Kutzley says the school had to deal "with a lot of grief and big emotions surrounding the deaths of the two boys and the uncertainty of the conditions of the other two.” A few days after the accident, two of the Brighton Pack of Dogs - Chevy and Duncan and handler Scott Storey - visited the school at the request of Kutzley and spent time with the staff during a professional development day.

In the words of Kutzley, the hour they sat petting the dogs and learning about their story and impact on Brighton, “was the break that our hearts and minds needed after dealing such a significant tragedy within our community….(and) was very special and meaningful.” Several days later, two different social-emotional-learning dogs from Brighton, along with a puppy-in-training from the Brighton Pack of Dogs, also visited the Clinton High School campus.

Kutzley said, “It was an emotional moment to see the dogs enter the room, see the smiles return to the kids’ faces, and to see them light up again. Within a few short minutes — by allowing the students to snuggle with the puppy and to pet Scout and Chevy - the tension in the room seemed to fade.” The counselor added that, “There is just something special about a puppy snuggling in your arms — or petting a beloved animal — that can ease anyone’s worries.”

Throughout the day the dogs visited various classrooms to console and interact the students or hang out in the senior lounge area. Kutzley says the students were grateful for their presence and stopped by often to talk with the handlers, pet the dogs and take pictures. She said the dogs, along with Karen Storey - who founded the Brighton program — and her crew of handlers, made a difficult day much easier for staff and students. Again, in Kutzley’s words, “(They) really helped our kids continue to heal and deal with this tragedy." Kutzley says she and the Clinton Community Schools, are “grateful for Karen and the Brighton Area Schools for helping my community during our time of need.”

Brighton has helped several other school districts start a therapy dog program, among them neighboring South Lyon and Walled Lake. And, when the Grosse Pointe Schools lost two elementary students in a 2019 house fire, Brighton sent a therapy dog and handlers to comfort and assuage the feelings of the grieving and disconsolate students.

Storey says Brighton started its therapy dog program about 12 years ago when a colleague of hers with Parkinson’s disease had her own service dog at an elementary school. While the children wanted to pet and cuddle with the dog they were unable to because of restrictions. This gave Storey the idea of starting a therapy dog program in the Brighton Area Schools geared specifically for the needs of the kids. Since then, it’s grown to be the largest in the state and possibly the nation, with a dozen dogs. Storey says she passed along her proposal to the administration and the Board of Education. They were enthusiastic about the idea, and the rest is history.