BAS Board Of Education Honors "Pack Of Dogs" Program 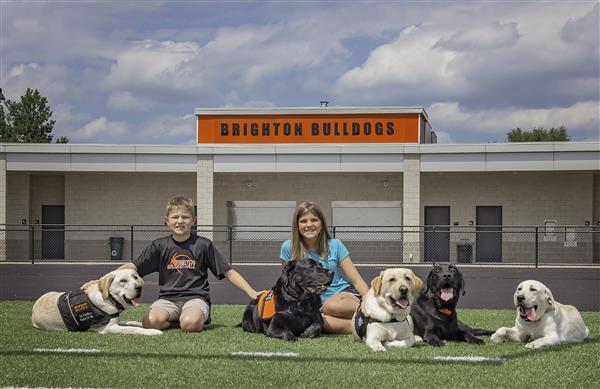 Insofar as is known, the Brighton Area Schools is unique as the only public school district in the country to have a therapy dog program that has a dog in every building — and one in which all the dogs are owned by the school district.

The “Pack of Dogs” program, as it is called, was honored at the Board of Education meeting Monday night as a “Shining Star”. The recognition was for a recently-concluded fundraiser that realized $5,000 for the program, with over 12,000 pairs of shoes donated. The person in charge of the fundraiser, Michelle Forcier, tells WHMI her volunteer group decorated large boxes and left them at schools and businesses at around 30 locations in the Brighton area for people to drop off their used shoes. She says the shoes are then sent to a non-profit organization which ships them to Third World nations. Forcier says they are repaired and distributed to the needy in developing countries around the world.

Brighton Teacher Karen Storey, who started the Brighton dog program, says the school district now has a dozen social-emotional-learning dogs — one for every school in the district. That includes the newest acquisition - Chevy - called a district-wide dog because he is assigned on a day-to-day basis to any school that needs extra help on a given day. Storey says that 13 other school districts in the state have now started their own therapy dog program after hearing about the one in Brighton.

Storey says representatives of school districts have come from as far as Pennsylvania and even Canada to get a first-hand idea of what the program is all about and see the dogs in action. She says they are very happy to help any school district they can if they need the temporary presence of one of Brighton's therapy dogs, such as what happened when two Grosse Pointe boys lost their lives in a tragic October house fire. The Brighton Pack of Dogs program sent “Scout” to help comfort the students at Richard Elementary School to help them deal with the grief they were experiencing with the loss of two classmates.

More information on the Brighton social-emotional-learning dog program can be obtained through the link. (TT)