BAS Board Member Earns Award For Commitment To Accessibility 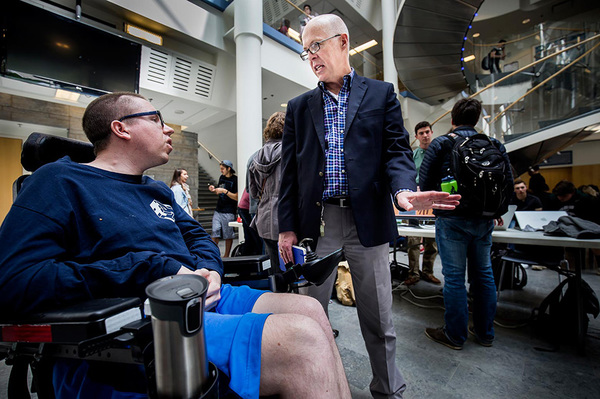 A commitment to accessibility for people of all abilities has resulted in recognition for a local school board member.

David Chesney, who serves as the Vice President for the Brighton Area Schools Board of Education, has been named by the University of Michigan’s Council for Disability Concerns as the 2018 recipient of the James T. Neubacher Award. It recognizes U-M faculty, staff, students or alumni who demonstrate a commitment to making the campus welcoming and accessible to people of all abilities.

Chesney is a lecturer in computer science and engineering at the university, who teaches a first-year student engineering course called, “Gaming for the Greater Good” in which students learn fundamental programming skills and then create a computer game with some form of social relevance. Chesney’s students have developed games for children on the autistic spectrum and for those with cerebral palsy. In addition, for the past two years, a senior-level engineering class taught by Chesney has developed technology to help Brad Ebenhoeh, a 32-year-old U-M senior from aerospace engineering, who suffered a brain hemorrhage that forced him to leave the university for a decade. After rehabilitation, Ebenhoeh re-enrolled and returned to campus, taking advantage of several devices developed by Chesney’s students, including a foot-pedal keyboard device that helps him take notes and send emails and a backup camera for his wheelchair.

Chesney received the Neubacher Award at a ceremony earlier today at U of M.