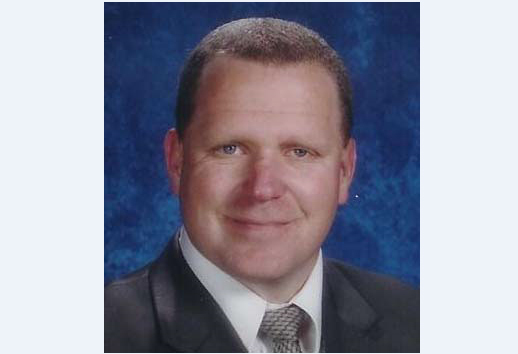 
“With great regret,” the Brighton Board of Education Monday night accepted the retirement of Superintendent of Schools Greg Gray, who is retiring after 11 years.

His last day on the job will be June 30th — the end of the district’s fiscal year. Board President Andy Burchfield said, in his words, “It’s been an absolute pleasure to have Dr. Gray our superintendent as long as we have.…We’re indebted to him for his service.” Gray, who said the past 11 years “have gone by in the blink of an eye,” responded to the praise by giving credit to “the whole staff.” Gray said, again his words, he has “been lucky enough to have been there at the right time.” The board discussed appointing an interim superintendent after Gray’s departure, but after lengthy discussion took no action.

Board Vice President Alicia Reid initially proposed that the board appoint Assistant Superintendent for Labor Relations and Personnel Sharon Irvine to the post, if she expresses an interest. Reid said that Irvine has been in her position for one year now, and is very knowledgeable about how the district runs. However, Trustee Bill Trombley said the process should be open to any qualified individual — particularly central office administrators, but also to building principals. Asked by Reid if he wanted to recommend any particular individual, Trombley replied that he was “not in a position at this time to throw out names.” Board Secretary Roger Myers emphasized that, in his mind, all three assistant superintendents are qualified, but said he thought the existing policy was that the position automatically went to the assistant superintendent for business and finance. However, whether that ever was an official policy was open to question. Besides Irvine, the other central office administrators are Assistant Superintendent for Business and Finance Michael Engelter and Assistant Superintendent for Curriculum and Instruction Elizabeth Mosher.

The board agreed informally that the policy committee would look at recommending a draft procedure for having an interim superintendent in place. Burchfield said he would follow up the discussion by asking the three assistant superintendents if any of them would be agreeable to accepting the additional duties. However, a couple of board members worried out loud that the individual might end up with too much on his or her plate by accepting the additional duties. Burchfield said that after querying the central office administrators, he will report back to the board at its June 22nd meeting.