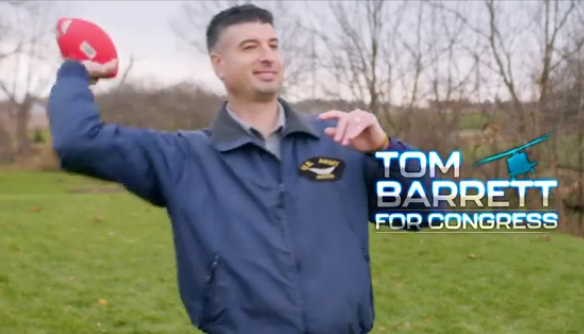 
While the district lines have yet to be finalized, it appears that Congresswoman Elissa Slotkin will have at last one established officeholder running against her next year.

Republican State Senator Tom Barrett of Charlotte posted a video to Facebook Monday morning announcing a run for the U.S. House in 2022, likely pitting him against Slotkin. While the 8th District Democrat currently lives in Holly, she has made it well known that she will move in order to run for the Lansing-based district that's being drafted by the state's new redistricting commission as it will not include her hometown.

In his announcement, Barrett says that after 21 years of service, he plans to retire from the U.S. Army, stating; "My next deployment is Washington, D.C."

Barrett, whose State Senate district features Clinton, Eaton and Shiawasee counties and a portion of Ingham County, used the announcement to criticize federal vaccine policies, saying that he is running to “put an end to this invasion of our constitutional rights (and) to stand up for those afraid of losing their career or struggling to put food on the table in Biden's economy."

The Biden Administration earlier this month formalized a mandate that businesses with 100 or more employees must either make sure they are vaccinated or are tested regularly and wear a mask. That policy is currently under review by a federal appeals court, which granted a temporary delay.

When asked to comment on the announcement, Rep. Slotkin's spokesperson Austin Cook told WHMI: "We welcome anyone who wants to run in this race -- that's the democratic process. In the meantime, Congresswoman Slotkin is focused on real work and delivering bipartisan results for mid-Michigan families, including by being at the White House today to witness the historic bipartisan infrastructure deal be signed into law."

In addition, Slotkin’s campaign didn’t waste any time and sent out a fundraising email to supporters, noting that during his time in the legislature, Barrett voted to “ban local minimum wage increases, against prevailing wage requirements that protect Michigan workers by ensuring they are paid fairly, and in favor of a gas tax (!!) that hits Michigan families amidst record-breaking inflation.” The email goes on to state that Barrett’s campaign announcement “focuses almost entirely on vaccine mandates -- not the everyday pocketbook issues that keep Michiganders awake at night. He also didn’t mention Elissa’s name once -- but did mention President Biden’s name three times.” Slotkin’s email never mentions Barrett by name.

The Detroit News notes that Barrett, who has served overseas tours in Iraq and Afghanistan as a helicopter pilot, has been a vocal critic of Democratic Gov. Gretchen Whitmer's administration and her handling of COVID-19.

The paper also quotes Republican Paul Junge, who lost to Slotin last year by 4 percentage points, as saying he "fully" expects to run again in 2022.