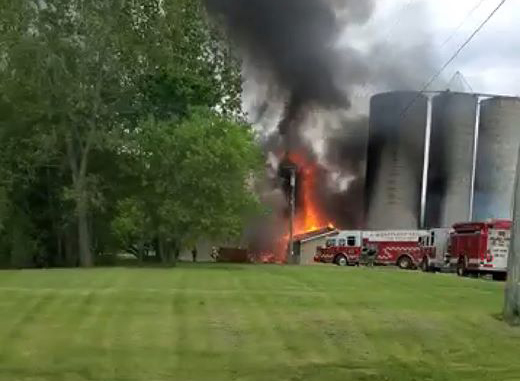 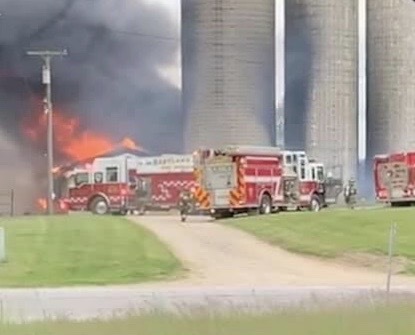 The fire was reported around 5:10pm at a barn on eastbound M-59, near Pleasant Valley Road. Hartland-Deerfield Fire Authority Chief Adam Carroll tells WHMI the fire was on the south side of M-59 and no injuries resulted. He says it was a barn fire with three silos attached to it. Carroll says those are intact and stable but the barn was a total loss. He said the fire got a huge start and first arriving units found fire pretty much throughout the barn. Although close to M-59, he said the barn was located toward the back of the property and had three attached silos. Carroll said barns are pretty wide open so fires tend to spread and grow pretty quickly and that was the case but crews got a handle on it pretty quickly. He said despite the volume of the fire, crews were able to stop it and prevent it from going to another barn and some other equipment. Carroll noted the silos took some serious heat but crews were able to get those cooled down and stabilized.

The Highland, Howell, Brighton and Fenton Fire Departments and the DART Team responded on scene while other agencies assisted with traffic control as both lanes of eastbound M-59 had to be shut down in the area. Carroll commended Livingston County EMS, MDOT and MSP for helping manage traffic on scene as both eastbound lanes of M-59 were closed completely. He said there was a lot of activity right in the beginning and everyone pulled together pretty quickly so it worked out well – adding there are no fire hydrants in the area so they had to tank in water. Crews had finished overhaul, putting out hot spots and stabilizing what was left but remained on scene as of 9pm for investigation.

Carroll said a couple of businesses work out of the barn so there was landscaping equipment and other equipment inside the barn. Considering the size of the fire and amount of stuff in the barn, he anticipated the investigation will take some time to complete.