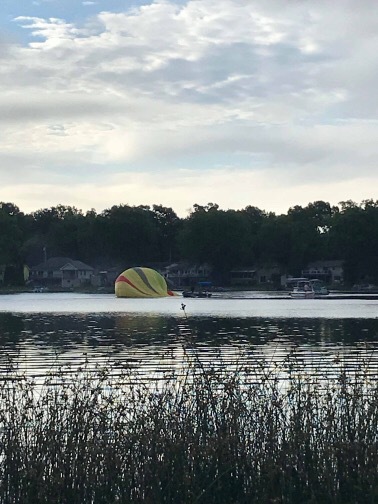 The pilot of a hot air balloon escaped injury when his balloon hit a power line near the beach area of Thompson Lake in the city of Howell this morning. The pilot was in a group of pilots who launched this morning on the last day of the Michigan Challenge Balloonfest in Howell.

The balloon hit a live power line near the boat launch area at 7:40 a.m. and the balloon plunged into the lake. A number of people who were watching Balloonfest from the ground witnessed the incident. The pilot was pulled out of the water by two people in a fishing boat. According to Howell Fire Department Chief Andy Pless, the pilot, who has not yet been identified, was not injured. Livingston County EMS, the Howell Police Department and the Howell Area Fire Department all responded to the scene.

When the balloon hit the power line it resulted in a power outage to the immediate neighborhood, knocking out power to about 40 customers. A DTE spokesman said the affected customers should have their power restored sometime this afternoon. The hot air balloon incident will be investigated by the Federal Aviation Administration - something which is considered routine. Picture courtesy of Scott Hable. (TT)