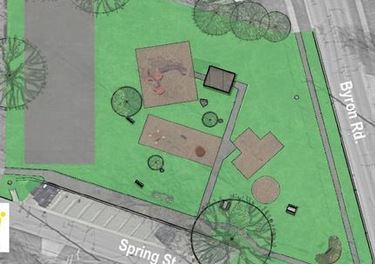 
An outdoor visioning session is set this weekend to discuss a facelift for a park in the City of Howell.

The City is partnering with the Kellogg Family Foundation and the Howell Area Parks and Recreation Foundation on the project for Baldwin Park, which is located on the corner of Spring and Byron Roads near St. Joe’s Livingston Hospital.

City Manager Erv Suida says Dr. Kellogg’s dental office is just down the road on Byron so it’s something he sees often and thus showed some interest in doing some improvements there. Suida says they looked at it and determined that they should probably hold a visioning event for the entire park to make sure any improvements go with what the community wants and expects. He told WHMI they’ll be meeting out at the park this Saturday at 11am and hope to get a lot of input

Suida noted they’re also seeking input via a survey that’s available on the City’s website and social media page where people can click on the provided QR code to access the survey. He says they really want a lot of input so they can build a park the community can be really proud of; adding every time they work in collaborations, the end product just seems to be better and it’s very exciting.

Some areas where input is being sought include whether to repair existing tennis courts or convert them to something else, playground improvements, repairing or replacing structures and accessibility improvements.

Saturday’s visioning session will run from 11am to 2pm. An event flyer is attached.