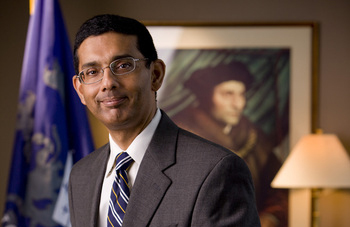 Dinesh D’Souza will be the keynote speaker for the group’s 2019 Lincoln Day Dinner, set for Thursday, June 20th at Crystal Gardens in Genoa Township. Born in Mumbai, India, D’Souza moved to the United States to attend school on a Rotary Scholarship. Following graduation from Dartmouth College, he went on to work in the Reagan White House as a policy analyst. From 2010 to 2012, D’Souza served as the president of The King’s College in New York City. He was called one of the “top young public-policy makers in the country” by Investor’s Business Daily and is the author of several #1 New York Times bestselling books.

In 2014 he pleaded guilty to using a "straw donor" to make an illegal campaign contribution to a 2012 U.S. Senate campaign, but was given a full pardon in 2018 by President Donald Trump. He has also been criticized for his perpetuation of the “birther” conspiracy that wrongly contended President Obama was not a U.S. citizen. He has since gone on to a successful documentary career. His films, “2016: Obama’s America” and “America: Imagine a World Without Her,” are respectively the #2 and #6 highest-grossing political documentaries of all time.

A VIP reception will be held before the June 20th dinner. Tickets, tables and event sponsorships can be purchased online by visiting the link below , by emailing info@LivingstonRepublicans.com or by calling Meghan Reckling at (517) 672-6823. (JK)