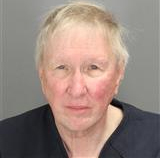 
A plea has been entered by an Argentine Township man who wiped his nose on a store clerk after being asked to wear a face mask.

68-year-old Rex Gomoll was charged with assault and battery after the May 2nd incident at the Dollar Tree store on N. Saginaw Street in Holly. Surveillance video from the store showed the clerk advising Gomoll that all in-store customers had to wear a mask to enter the store as stated on the signs posted on the entry doors. Gomoll is then seen walking over to the clerk and wiping his nose and face on her shirt. He then reportedly told her "Here, I will use this as a mask.” Gomoll continued to be loud and disruptive inside the store before leaving and driving away in a van.

In Oakland County District Court on Monday, Gomoll entered a no contest plea to the charge. While that is not an admission of guilt, it will be treated as one at sentencing, which is set for July 14th. He faces up to 93 days in jail and/or a $500 fine.