Area Man Meets First Responders Who Helped Save His Life 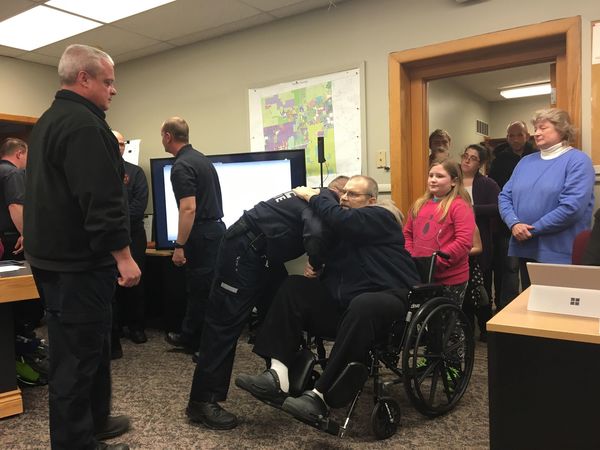 A local man who officially died twice in an incident said to be “unprecedented” says he is “eternally grateful” for his wife and the first responders that helped save his life.

Highland Township Fire Chief Ken Chapman says 62-year-old Jerry Copeland “beat the odds and then some”, referring to an incident that occurred on January 30th. Jerry’s wife of 35 years, Sheryl Copeland, says they were watching TV when she noticed he was gasping for breath and knew something was wrong. Sheryl tells WHMI she called 911 and an Oakland County dispatcher coached her through CPR until emergency personnel arrived. Speaking of the call taker Sheryl says, “She kept me calm and kept me focused and got me to get him down out of his chair…and she told me how to do CPR. She counted with me. She was amazing."

Sheriff’s deputies were first on scene, finding Jerry unconscious, unresponsive and without a pulse, prompting them to apply the automatic defibrillator. Highland Township firefighters and Star EMS paramedics then arrived and provided additional shocks, as well as establishing advanced life support. It took 20 minutes and an all-out effort from responders before Jerry achieved return of spontaneous circulation. Jerry was then transported to the hospital where he again suffered cardiac arrest and died a second time before being revived. He went on to make a full recovery, despite a 3% chance of survival.

Charles Hughes, the lead paramedic on the call, says the outcome of the incident is the kind that first responders always hope for, calling it surreal and rare. Hughes says, “The number one variable in this survival case is his wife. Her ability to listen to the dispatch, to do CPR with instructions, is what made the difference.” He and Sheryl both highly recommended taking CPR classes, noting that CPR will help give the person a better chance at survival and/or minimize brain damage.

After waking up in the hospital, Jerry says he knew he had to meet the people who saved his life. At the Highland Township fire station Wednesday, Jerry met the first responders to shake their hand, hug them and thank them. Discussing the CPR save Jerry says, “It took everyone with their specific talents and abilities to keep me alive and for me to be here today. They’re all very talented and they’re all very exceptional in what they do.” Jerry says he is grateful for his wife, everyone involved, and that he is alive.

Charles Johnson, a Sheriff’s deputy that responded to the scene, says situations like this are part of the reason he became a police officer adding, “I’ve been a police officer for 30 years and it’s rare to see a positive outcome like this. Usually we get the latter rather than the positive. For someone to come out and be alive with their family…you can’t say how much that really means to a police officer.” Todd Russell, a Lieutenant with the fire department, says it’s also nice for first responders to know the outcome of the incident as that doesn’t happen often.

Sheryl Copeland says doctors are shocked by Jerry’s recovery. He plans to soon meet with hospital personnel to thank them. Jerry says he is taking better care of his health now and is doing well. (DK)