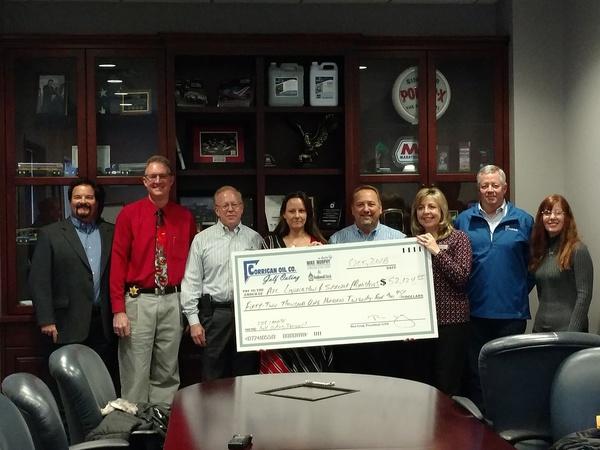 Individuals with disabilities are the real winners following a golf outing held this past summer.

Corrigan Oil, Livingston County Sheriff Mike Murphy and First National Bank held their 5th Annual Golf Outing, which raised $52,124.45. An official check presentation ceremony was held Wednesday. Half will go to Special Ministries of Livingston County, a non-profit that provides social activities for children and adults with disabilities - of all ages and all abilities. Executive Director Sabrina Musko says they let them know they’re in a safe environment, just love on them and make sure they’re having a lot of fun. She said the golf outing was an amazing event and it was great to see all of the people who came, even those from outside of Livingston County to support non-profits. Musko, a big fan of surprises, didn’t find out the actual amount until the check presentation ceremony and was certainly surprised. She tells WHMI they are so incredibly blessed to be one of the recipients of the golf outing and want to reach as many people with disabilities as they can, noting they’re working on a shoe string budget so the funds will make a huge difference and help incredibility to be able to continue programming and make a difference in Livingston County. She said a big thank you is owned to everyone who pulled off the golf outing, which she recognizes wasn’t easy with so with so many participants. Musko said she’s thankful to all of the golfers and volunteers and wants them to know how much they are going to change people’s lives.

The other recipient of the golf outing was the Arc of Livingston, which empowers and supports community members with developmental disabilities and their families so that they can participate with and contribute to the community. Executive Director Anne Richardson says the funds will play a huge piece in helping them address issues that families with developmental disabilities go through; adding the amount of money raised was tremendous. Richardson says the funds will pay for one of their part time advocates, thus increase the amount of outreach they can do and the amount of people they can serve – adding it is truly a gift.

Arc Board Chair Kim Hughes says they serve as an advocacy agency for persons with disabilities. She says they work with agencies and organizations to help them understand persons with disabilities and make systems a little bit fairer for them. In schools, for example, Hughes says many won’t know the different needs someone with a disability might have so Arc will work with administrators and teachers to help them understand. She says Arc helps and supports parents but also educates and works with different programs to get them the help they need. She says their fashion show is an annual event that opens the Christmas season and its tradition now but also their primary funding, as the Arc is community and partner supported. Hughes says there has always been the desire and need to do more and it’s hard to turn families away or be unable to make it to an event with someone because of limited funds but now, the Arc is at a place where they can do more. She says they can now reach more families but also look at ways to connect with the community. Hughes noted the donation from the golf outing was a huge surprise because it wasn’t budgeted and now they get to do more, adding they are very grateful to the community and couldn’t do it without them. She further noted they don’t like to think of themselves as a charity. Hughes says when they say advocating on behalf of persons with disabilities, their hope is to one day no longer be needed one day so families and persons don’t need someone to walk side by side with them to help interpret to the community and different government systems who they are, and that it’s something more natural one day. She says the ideal picture would be that people understand persons with disabilities and the Arc is obsolete, one day.

The event was held at Hartland Glen Golf Course in August. 70 teams were registered with around 280 golfers taking part. The ARC of Livingston and Special Ministries of Livingston County will each receive $26,062.23 as a result of the golf outing. (JM)