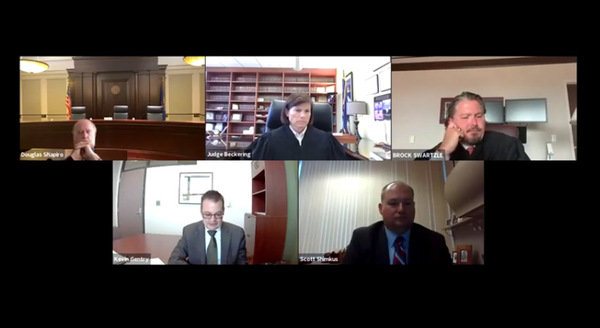 Arguments were heard this week by the state’s appeals panel on the nature of a defense expert’s testimony in the pending re-trial of Jerome Kowalski.

An online hearing was held Tuesday by the Michigan Court of Appeals on whether Dr. Richard Ofshe will be allowed to testify as an expert defense witness for Kowalski. In 2013, Kowalski was sentenced to life in prison for his conviction in the murders of his brother and sister-in-law in their Oceola Township home in 2008.

The conviction was vacated in 2019 following the revelation that ex-Judge Theresa Brennan, who presided over the case, was having an inappropriate relationship with the lead prosecution witness, former State Police Detective Sean Furlong. One of the issues that Kowalski’s defense had with the first trial was Brennan’s refusal to allow an expert witness on false confessions.

Dr. Ofshe, on the other hand, is expected to discuss the factors involved in coerced confessions. Kowalski originally confessed to the murders, but quickly recanted, saying he had been in the throes of alcohol withdrawal and succumbed to pressure tactics by Furlong. A motion by Kowalski’s defense that Dr. Ofshe, an expert in police interrogations, be allowed to testify was granted last October by Shiawassee County Circuit Court Judge Matthew Stewart, who is presiding over the retrial. Stewart ruled that while Ofshe cannot testify on any case-specific testimony related to Kowalski's case, he could testify about the generalities of false confessions.

However, that ruling was appealed by the Michigan Attorney General’s Office, which is now prosecuting the case. During arguments Tuesday, Assistant Attorney General Scott Shimkus said the issue under consideration is whether Dr. Ofshe’s expertise is appropriate for the specific legal question under consideration. "It's all about falsity. The issue here truly is narrow. It's whether the confession is true or not, not whether it was reliable or not."

Kowalski’s appellate attorney, Kevin Gentry, rebutted that point, saying that the tactics used by Detective Furlong to elicit the confession make Dr. Ofshe’s testimony all that more necessary to give jurors a full picture of the confession. One example that came up during arguments was Furlong correcting Kowalski when he said he had shot the victims at a distance, instead telling him they were killed at close range. Gentry said that's a detail that only the actual killer would know and contaminated the confession. "Really, we want Dr. Ofshe to be able to testify that there are signs of unreliability. That when you contaminate a confession, when you give evidence that only the perpetrator would have, that that makes it unreliable. And we want him to testify that here, that happened; because it did. We will endeavor to get Detective Furlong to the stand and ask him the same question and point that out. We want the jury to know why that's important."

Gentry concluded by acknowledging it will be up to the jury to ultimately decide whether the confession is false, but that Dr. Ofshe's testimony is crucial for them to make an informed decision.

It’s not known how long the appellate panel will take to decide the issue. In the meantime, Kowalski remains lodged in the Livingston County Jail pending a new trial. If convicted a second time, he would face up to life in prison.