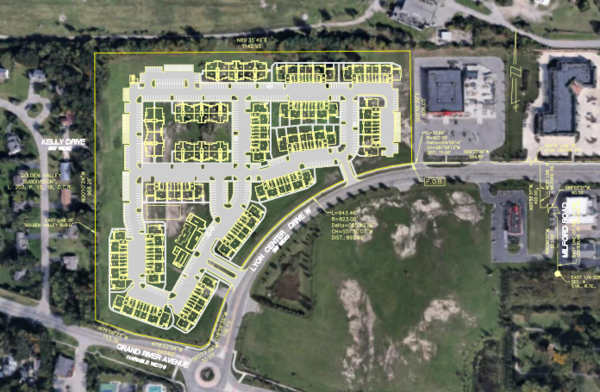 Two projects proposed across the street from one another in Lyon Township have received a generally favorable response from municipality officials.

The Board of Trustees at their meeting Monday held a conceptual review of plans for the Watermark Residential apartment complex that is proposed in the Lyon Crossing development on the north side of Lyon Center Drive West. The 340-unit complex would consist of 17 high-end two and three-story apartment buildings, meaning the property would have higher density at 17 units per acre rather than the 12 units per acre that is permitted in New Hudson. The Board was split in its thoughts on the higher density, with Trustees Lise Blades and Sean O’Neil expressing opposition to it, while Trustee John Hicks and Supervisor John Dolan were in favor. Dolan feels the dealership would be suited for the property, which was originally intended for larger commercial uses; however other Board members felt quite the opposite, with Blades saying that she wants the business in Lyon Township, just not in that location. Dolan did however state that the influx of traffic needs to be considered, which other Board members echoed.

Another issue frequently discussed and what all Board members seemingly wanted was a significant buffer between the proposed complex and the residents on Golden Valley Drive. Project applicant Tony Antone feels that a residential development would better compliment that area than a big box retailer stating, “We were always worried about, ‘ how is this going to go’? We have single family residential up against a big box and we just punted that because it never came anyways.”

Antone, who is the executive vice president for Kojaian Management Corporation, has also proposed a Szott Chrysler Jeep dealership on the south side of Lyon Center Drive. The Board on Monday also considered Antone’s request to amend the Lyon Crossing planned development to allow for both projects, and held a conceptual review for the dealership plans. Antone told the Board that the two projects could help complete the Lyon Crossing development, which is on property that he purchased nearly 20 years ago.

Antone says, “We think that this is a great fit to kind of help the overall cause and we’re hopeful that between this and… the Szott dealership… to be able to really finish off this development, and have four out lots left on Grand River which would be for retailers and restaurants, and we think that this development could come to a conclusion in the next couple of years with all of the construction sort of happening at once.”

Speaking to the plans, several Board members noted that they liked the architecture of the building shown in the dealership renderings. Concerns were raised about the business’s lighting and how it could affect neighbors, as well as the potential need for additional storm water management. As for placement, Trustees Kristopher Enlow and Lise Blades both felt the dealership would be better located elsewhere. Township Planner Brian Keesey expressed concerns about the lack of demand for such a business in that area.

Still, Thad Szott, who is part of the family that owns several Chrysler Jeep dealerships, remained certain that the business would benefit the community telling the Board, “I know sometimes you get a vision kind of what you wanted it to be 20 years ago, but the dealership business has changed too and I think if we get an opportunity to develop here, those four open areas will fill up quickly…Restaurants just love dealerships because we constantly feed them all day long.”

The review by the Board served to provide feedback to the applicant and developers, and thus did not require action. Project leaders can now move forward with preliminary plans. (DK)