OB/GYN Among Anti-Maskers To Address HPS Board 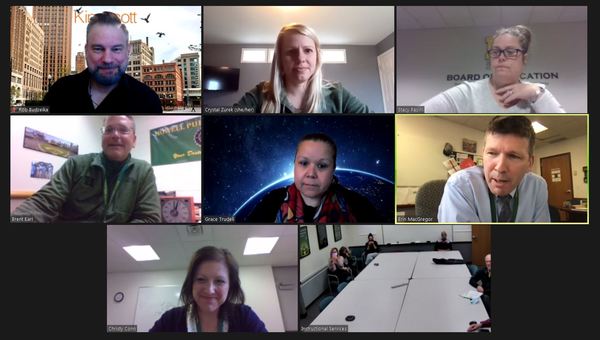 
It took an extra week, but protestors got their chance to call for the end of mask requirements to the Howell Public Schools Board of Education.

Last week, a group calling itself Unmask Livingston attended the Board’s in-person meeting refusing to wear masks. That forced the Board to adjourn before business could be attended to. Last night, the Board held a special meeting over Zoom to make up for it.

During Call to the Public, several residents and parents, including Jacquelynn Pike, spoke out against the mask mandate in the schools. “Our concern and what we have a major problem with is a system that forces healthy children to wear masks to attend schools that also threatens parents with fines and or imprisonment under the truancy section of the Michigan compulsory education law. The mandates and policies forcing children to wear masks are based in fear and not science. They’re unconstitutional and a violation of our children's rights.”

Several residents spoke towards the perceived effectiveness of masks and how data they believe in suggests they are ineffective for protection against COVID. They also argued that masks are easily contaminated and often not cleaned properly.

Alena Anderson said the mandate is an overreach of power and is having detrimental physical and mental effects on children. “Children have spent almost an entire year with coverings over their face. They are participating in athletics with masks strapped over their nose and mouth. They are unable to see each other’s faces. Unable to see their faces of their teachers. They are breathing in dangerous amounts of carbon dioxide. There are reports of collapse, lightheadedness, fatigue, and anxiety. We are on the wrong side of history requiring children to wear masks while claiming they are resilient."

Kate Pietila said there are consequences to the complacency of accepting these orders and that they need to follow “evidence-based science.”

However, numerous scientific studies and guidance by the Centers for Disease Control & Prevention have repeatedly demonstrated the efficacy of masks to limit the spread of COVID-19, especially when adherence is high. In addition, an investigative collaboration between The Detroit Free Press and Columbia School of Journalism detailed how a relaxation of mitigation measures, like wearing masks, is linked to the rapid spread of the more transmissible B117 variant of the virus, which has placed Michigan "with a seven-day case rate of 551.8 cases per 100,000 people — the worst in the country."

Despite that scientific consensus, Dr. Gianina Cazan-London, an OB/GYN from Livingston County who is associated with Sparrow Hospital, also spoke Monday night at the meeting. Referring to herself only as Dr. Giana Cazan, she expressed frustration that she was unable to show a video of a carbon dioxide detector and an oxygen detector that she indicated would show what happens behind a mask and how she believes neither children nor adults can tolerate masks. However, she was told the Board could not activate her video and advised to mail it to the board separately.

Despite that, she reiterated her stance. "I would like to show you how all children and adults cannot tolerate a face mask. ‘Medically tolerated’ is not actually defined in this mask order. As a physician, I would like to point out that while all school employees and students really cannot tolerate face masks and thus as a school board you should decide to protect the health and well-being of all students and your staff and your teachers by resolving as a board that your district will not require face masks."

That opinion is not only in conflict with scientific consensus, it also contradicts official Sparrow Hospital policy.

Dr. Cazan-London has also addressed the Livingston County Board of Commissioners at least twice during Call to the Public urging them to forego a declared local State of Emergency that would have allowed for online meetings, referring to social distancing guidelines as "made up numbers" while questioning the safety of COVID vaccinations.

When asked about Dr. Cazan-London’s opinions standing in conflict to official Sparrow Health System policy, spokesman John Foren concurred that her opinions are not only outside health system policy, but the consensus of the medical establishment. “Dr. Cazan is a part-time physician at Sparrow with no leadership roles or responsibilities. Her opinion is not reflective of Sparrow, nor does she represent it as such. She is not a medical expert in infectious respiratory disease nor in treating children. It also is not consistent with the American College of Obstetrics and Gynecology, among other professional associations. Sparrow has been recognized nationally as a healthcare leader during the pandemic and we remain vigilant about protecting our community through any means possible. We live by the message: Wear a mask. Save a life.” Foren also emphasized that Cazan-London is strictly a per-diem employee and does not regularly work shifts for the system.

Public comment wasn’t completely dominated by the “anti-mask” side of the debate. Kasey Hilton said that her child has had an amazing year with no issues making friends or from taking down their mask to get a drink of water like some parents claimed their students have. She said, as a teacher herself, she doesn’t know any teacher that wakes up and thinks that they are going to ruin a child’s day. Hilton thanked the Board for keeping everyone safe, saying the policy has worked in Howell while some other districts still aren't back in-person.

Howell virtual teacher Joanna Vantaram said her class of 16 students are highly engaged, have made friends with each other, and are a joy. She said many students and teachers, when in-person, bring more than one mask so they can change out as needed.

Donna Smith, a parent, wanted the Board to know that for as many people that there are being vocal about not wanting masks, there are as many that support the decision and are thankful for the schools’ efforts. She said she works in health care, and that some of the things she was hearing made her want to scream. Smith said she believes in evidence-based guidelines for practices, not the things people are spouting by pseudo-science.

At the end of the meeting, Howell Superintendent Erin MacGregor and multiple members of the Board of Education thanked everyone who gave feedback, saying it was appreciated.