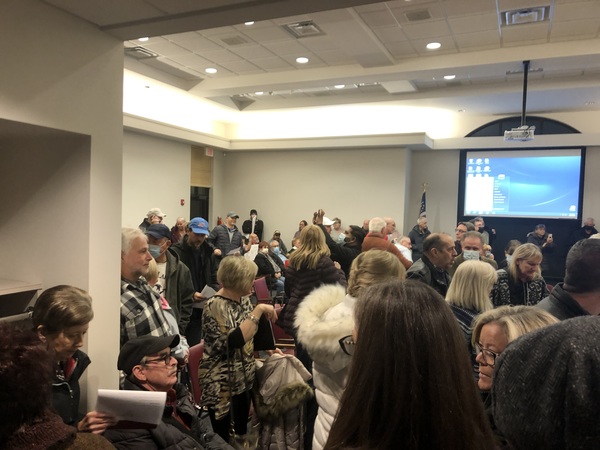 
Tense environments at various local government and school board meetings have become pretty common, not only during the pandemic but on a continuing basis, and it’s prompting discussions about security in one local community.

In Genoa Township, residents have been crowding meetings over the past few months. First in regard to a possible gravel pit project from the MDNR that was ultimately scrapped but more recently, a possible asphalt plant. A board meeting about the latter in early December brought out a capacity crowd that resulted in it having to be postponed. The tone of that meeting has raised safety and security issues, which prompted staff to request a police presence at a recent Planning Commission meeting where a large number of people again showed up to voice concerns - albeit less threatening than before.

Assistant Township Manager/Community Development Director Kelly VanMarter noted at school board meetings, there’s been a sergeant at arms or police officer available to escort unruly people out. She said people were very passionate, angry and upset and she went into that meeting thinking that if someone was unruly and asked to leave; there’s no one in the building to escort them out.

VanMarter stated that in light of how society has become very emotional and heightened, it might be time for the township to have another security discussion and be more cautious in general. She said people were very passionate and very upset and this was the only time in her more than 20 years with the township that she’s been a little bit fearful of being in a room full of very angry people who were shouting and she was feeling very trapped – noting the boardroom only has two exits.

It was stated during the meeting that when there are heated issues, there should be a group strategy to exit the building. The township is said to be actively looking into potentially adding another door behind the board table for an additional exit strategy. It was stressed that security is very important and discussions will continue moving forward.