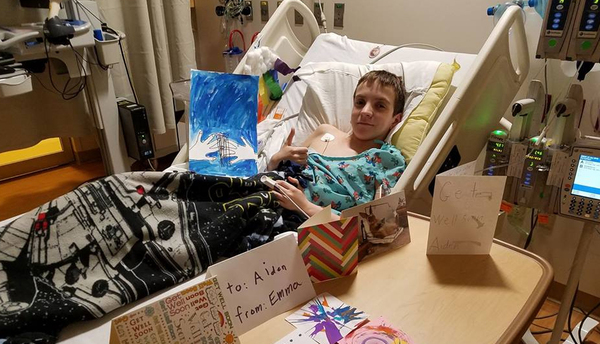 A local family says the power of prayer worked unbelievably fast for a Tyrone Township teen awaiting a heart transplant.

13-year-old Aiden Saunders underwent a heart transplant last night at the University of Michigan Mott Children’s Hospital in Ann Arbor. The Saunders family lives in the close-knit Lake Shannon community and Aiden is described as a very active kid - a competitive swimmer with the Hartland Hurricane swim team but also an active water-skier and snow skier. He attends the Charyl Stockwell Prepatory Academy.

In late January or early February, limitations in exercise began to develop and Aiden could only make it through half of swim practice before leaving from fatigue. His family thought it was a virus but later learned Aiden had very severe congestive heart failure, with his heart only functioning around 18%. The family just learned that Aiden had been accepted for a transplant and was listed as 1-A, which is the highest priority and good news. Aiden was put on the transplant list Wednesday afternoon and the family is now crediting the power of prayer after receiving word Thursday - less than 24 hours later - that a perfect match had been found.

In speaking with WHMI after learning the good news, Aiden’s father Bill Saunders said everyone was shocked, even the doctors and nurses but especially Aiden. He says Aiden was very happy and very excited to hear the good news, although at first he wanted to make sure they weren’t joking. The surgery was anticipated to take around 12 hours, so Saunders says everyone was preparing for a long night. He posted this morning that the surgery was successful and his son has a new birthday; March 16th, 2018.

Meanwhile friends, family, neighbors, community members and even complete strangers have been coming together for the family. Saunders says all of the prayers and support have not only been uplifting but very humbling.

Neighbor Kristina Masters says they got to know the family since their kids were on a water-ski team together. She says the family has always been very involved in the school, church and community so people have been reaching out, wanting to support them. Masters says Aiden’s parents have been trying to wrap their heads around the situation since it happened so rapidly but it’s been really tough between all of the time spent at the hospital, having three other daughters to care for, the loss of work and all of the medical expenses. She’s set up a GoFundMe account for the family, along with a separate fundraiser 5K run/walk/bike fundraiser at Lake Shannon on April 28th– which she’s hopeful Aiden will be able to attend. That involves a one-mile fun run or bike for kids with prizes, a 5K run or walk for adults, music and food. Organ donor registration will also be done on site at the event.

Complete details are available through the link provided. (JM)