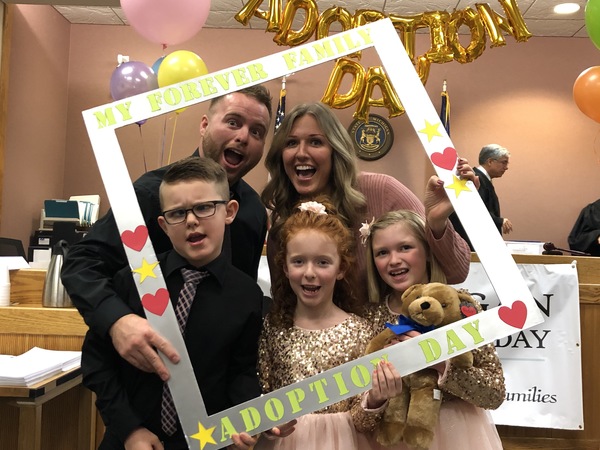 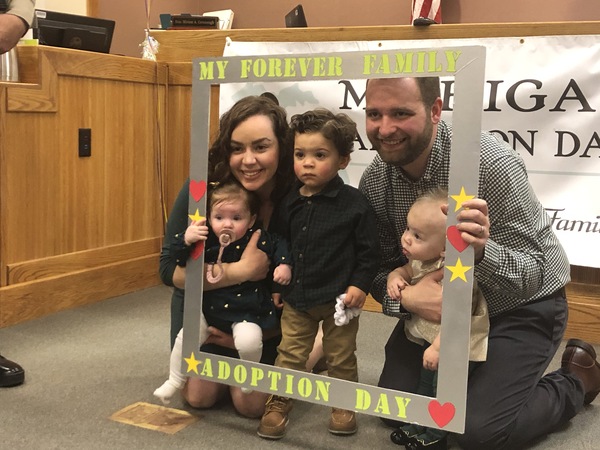 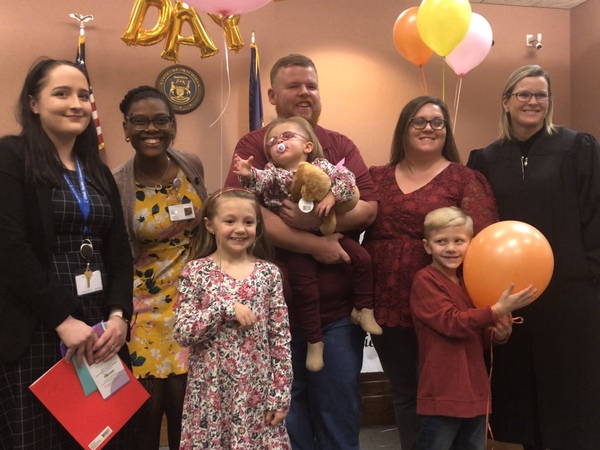 Adoption Day takes place every year around the Thanksgiving season, highlighting the importance of adoption and needs of children in foster care, while creating for many of them a “forever family.” Livingston County was one of 30 counties in Michigan taking part in the 2019 ceremonies.

Tuesday morning, six families officially welcomed in new members inside a packed 44th Circuit Court in Howell. Chief Judge Miriam Cavanaugh presided over the event, and said this day was like “Christmas for the courts,” with a “lot of joy and love and happy people.”

With it, she was able to make official young Adeline becoming a part of Brian and Jackie Crandall’s family, bringing to a close the oldest open case in the court. Legal issues caused Adeline’s adoption to be held up for nearly 5 years, to which father Brian declared this day to be “an amazing day,” and his daughter to be “truly a blessing.”

Scott and Becky Hathaway adopted daughter Eliana as a family placement. Scott said that while at times it has been difficult and straining for the family, they find it very worth it and rewarding to give a child a place to call home and a family.

Chuck Edwards and his wife Cassandra welcomed 16-year old Brianna to their family, as well. Chuck shared with the courtroom how life can throw you curveballs and the importance of finding families for older foster children. He said, “I was supposed to be an empty nester 3 years ago, but man plans, and God laughs. And for every bit we’ve done for her, we’ve been extremely blessed in our lives. And we knew we wanted to take a teen because they are forgotten in so many phases. She has given us such great purpose in our lives and we’re proud to be her mom and dad today.”

Erica and Jeff Poag adopted young Eliana, keeping her united for life with her 2 older siblings that the Poag’s have also adopted. Jeff said it’s been a long time coming and while they haven’t counted out becoming foster parents for a 4th time, for now they are going to enjoy some normalcy in their lives.

In another case that kept birth-siblings, together, Jason and Mariah Wright adopted 6-month old Shiloh, allowing her to stay united with her older brother in the Wright home. Mariah shared that significance, saying they want them to grow up together and have a relationship with biological family. Mariah continued, saying “Because family is forever, even through adoption.” Shiloh’s birth grandmother stood up during the proceedings and delivered an emotional speech feeling blessed for being able to maintain a relationship with her grandchildren when many in her situation lose that during adoption.

Kenneth and Nicole Bradbury welcomed 11-year old Kirsten to their family. Nicole said this is the day they are completing their family and that she is honored to have such an amazing daughter in Kirstin.