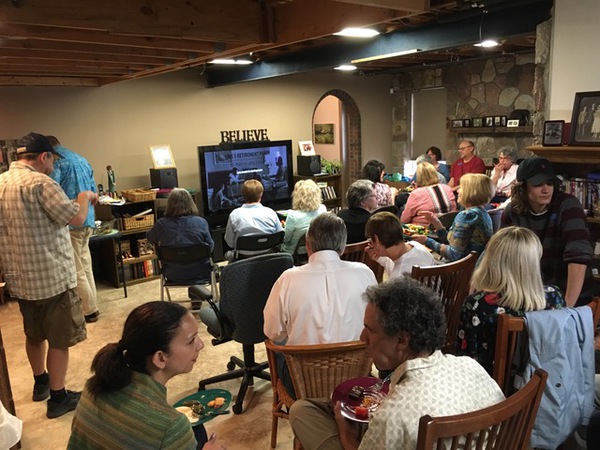 Several dozen area residents turned out for a house party in Pinckney Monday night as they cheered on a hoped-for retirement of an oil pipeline they say threatens the future of the Great Lakes.

Hosted by local activist Terri Wilkerson, the gathering tried to bring awareness to the potential threat that the Enbridge Line 5 poses to the Straits of Mackinac. The line, which carries 22.5 million gallons of oil per day underneath the Mackinac Bridge, is 65 years old this month, prompting environmentalists across the region to hold “Retirement” parties. They were coordinated by Oil & Water Don’t Mix, an advocacy group dedicated to forcing the shutdown of the pipeline.

The group’s concern increased recently after Line 5 was dented when a tugboat anchor hit a nearby electrical line, spilling over 600 gallons of a mineral-based coolant into the straits. That cleanup continues, but Wilkerson and those who gathered on Monday say that up to 740 miles of Michigan shoreline would be affected if Line 5 was to sustain a rupture. Enbridge officials have repeatedly insisted the lines are safe and point to an independent review by the Pipeline and Hazardous Materials Safety Administration of the company's inspection data on Line 5, which, "concluded that the Line 5 Straits crossing is safe and fit for purpose."

But Wilkerson says that Canada-based Enbridge is the same company responsible for the 2010 spill which resulted in 35 miles of the Kalamazoo River being closed for two years and that Line 5 is 24 years older than that one. Next up for the group is a rally on May 29th at the ferry dock in Mackinaw City to demonstrate citizen support for closing the pipeline to legislators, business leaders, and media that will be traveling to the Detroit Chamber of Commerce Mackinac Policy Conference on Mackinac Island. (JK)