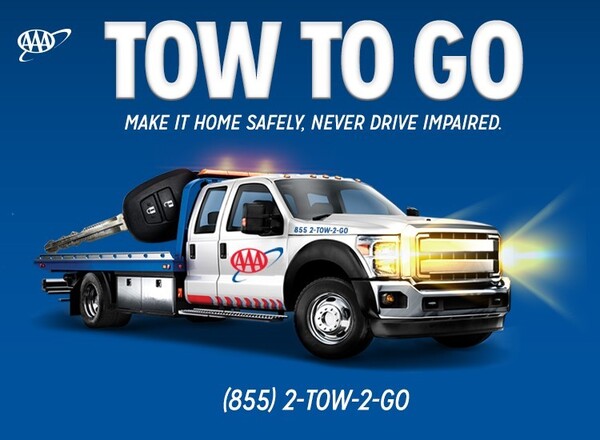 
Livingston County residents and others who might find themselves in an unexpected pinch on New Year’s Eve have a potential option for a safe ride home.

AAA Michigan is again offering Tow to Go during the final week of the holiday season, serving as what it says is a last line of defense to keep impaired drivers off the road. The service is provided through 6am Monday, January 3rd.

Officials say the program has removed more than 25,000 impaired drivers from the road. When called, a tow truck transports the would-be impaired driver and their vehicle to a safe place within a 10-mile radius. The service is free but AAA asks that it be treated as a backup plan.

Approximately one-third of all traffic crash fatalities in the United States involve drunk drivers. According to the National Highway Traffic Safety Administration during the 2019 Christmas and New Year’s Day holiday periods, there were more drunk driving-related fatalities, 210, than during any other holiday period that year across the U.S.

AAA Michigan spokeswoman Adrienne Woodland said AAA is proud to provide this life-saving program during the holidays - yet they still urge people to identify a safe ride home before they party and treat Tow to Go as their last resort.

More information is included in the attached press release.