Despite Criticism, MSU Board Names Engler As Interim President 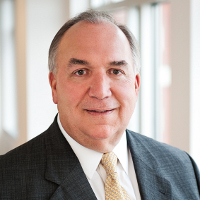 As had been rumored, Michigan State University trustees have named a former governor and alumnus as interim president as the school faces scathing criticism over its former sports doctor, Larry Nassar.

The school's Board of Trustees unanimously voted this morning to hire John Engler following last week's resignation of Lou Ann Simon, who stepped down after Nassar was sentenced to decades in prison for sexual abuse. He was accused of abusing young female athletes for decades under the guise of medical treatment while working for the university and USA Gymnastics. Engler was Michigan governor from 1990 through 2002. After leaving office because of term limits, the 69-year-old Republican directed business groups in Washington.

Some have criticized the move, pointing to Engler’s relationship with Michigan Attorney General Bill Schuette, who has launched a criminal investigation into how MSU dealt with Nassar. Schuette served in Engler’s cabinet as head of the state's agriculture department. Engler also previously endorsed Schuette’s run for governor this year. The Michigan State University faculty steering committee said it would call for a vote of no confidence to oust the entire Board of Trustees because of its hiring of Engler. In a statement released Tuesday, the committee made clear the choice of Engler called into doubt the board's decision making process. "They seem to have selected, without appropriate consultation from the MSU community, an individual with no academic leadership experience as an interim president."

MSU trustees also named another former governor, Democrat Jim Blanchard, to advise the school as it faces lawsuits filed by more than 100 girls and women and investigations by Schuette, the NCAA and Congress. (JK)