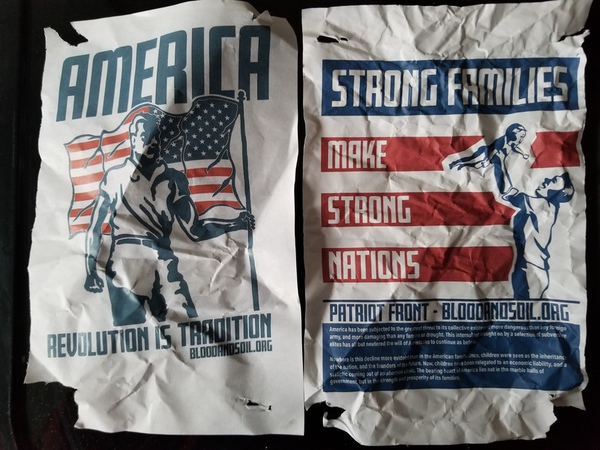 In advance of this afternoon's planned March Against Fear, a response to the placement of white supremacist flyers in Howell last weekend, a new batch of flyers was posted around the Howell Carnegie District Library, where today's march is set to begin.

The flyers were found this morning stapled to trees and taped to lightposts around the library. The group behind the flyers, Patriot Front, is a nationally recognized white supremacy organization that uses the the Nazi-identified phrase “Blood and Soil.” The Southern Poverty Law Center, which tracks hate groups across the country, says Patriot Front promotes a ”…dead-serious advocacy of white-supremacist ideology…intended to appeal to a more militant mindset.” Library Director Holly Ward Lamb tells WHMI that she's been in contact with the mayor and city manager about the incident. "I think the city is on it and I'm not worried at all." She added that this incident and the one last weekend "do not reflect Howell" and that "anywhere you will find elements that do not reflect the greater whole and I think this is an incident of that. I do." She says the library will remain open until 5pm as normal and she encourages patrons to visit as planned and she is not anticipating any problems.

Howell Police are investigating the placement of the flyers and are expected to be visible for today's march, which is being held by Citizens for Unity. The group is asking participants to meet in front of the Howell Carnegie District Library at 2:30pm. From there, they will proceed on a walking demonstration along Grand River. They ask participants to wear appropriate footwear and clothing and that signs promoting love, peace, equality, democracy, and all related themes are encouraged. They add that this will be a quiet, peaceful, kid-friendly demonstration with a goal of getting more attention than what they called “despicable unwelcome cowards who are trying to stir up hate in our community.” (JK)