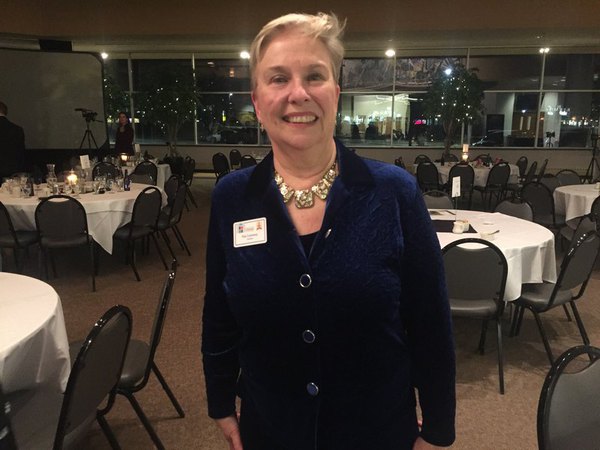 Pat Convery, a longtime member of the Howell Area Chamber of Commerce, has been named the organization’s 2017 Citizen of the Year.

2016’s recipient, Patti Griffith, presented the award to Convery at the Chamber’s 61st annual Citizen of the Year dinner on Thursday. The event was held at Cleary University in Genoa Township. Cleary’s Johnson Center was full of community members and leaders, many of whom have met, interacted, or worked with Convery through her numerous roles.

Convery has been with the chamber for 28 years and has held leadership positions in a number of local organizations. The Hartland resident is the only chamber professional to receive the Michigan Chamber Professional Award twice since its inception. Still, she remains humble, saying it is a tremendous honor to serve with people of such a high caliber.

Convery says she was shocked when she realized she had been chosen as Citizen of the Year, adding that she attended a “sham meeting” held by past recipients who fooled her into thinking someone else had been chosen. Griffith began the presentation with a slideshow of clues as to who the 2017 winner might be. Convery says she noticed she had a lot in common with the recipient based on those clues. Once she figured it out, she started to cry. Convery feels Livingston County is a passionate community filled with people who work hard to make it so and says it’s an honor to even be considered as Citizen of the Year.

A number of awards were also handed out prior to the citizen announcement, including investment and prosperity awards to Adam Merkel Restaurants, Chem-Trend Limited Partnership, Thai Summit America Corporation, and TG Fluid Systems.

Rick Resinger and Brandi Tambasco were recognized for their leadership and professionalism.