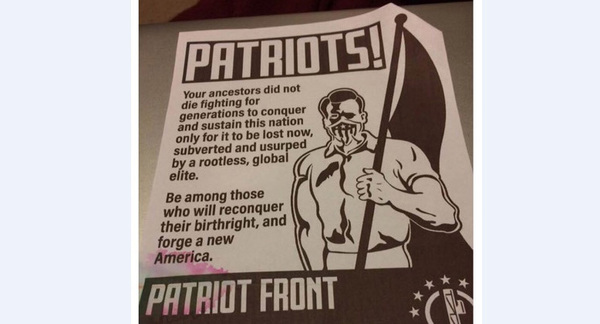 The Howell community is responding to what many view as a recent hate-related incident.

Flyers were placed on the windshields of vehicles parked around downtown for an event and film screening at the Historic Howell Theater last weekend that celebrated cultural diversity. About 100 people attended the event and film screening at the Historic Howell Theater, which brought awareness to the plight of girls in India, as well as the need for education and women’s rights. Some see the placement of the flyers at such an event as an act of intimidation. The group behind the flyers, Patriot Front, is dedicated to bringing white nationalists together under an activist banner using the phrase “blood and soil”, which is often used in the Nazi/white supremacist movement. Their website promotes a race purity theory and states that (quote) "Democracy has failed in this once great nation, now the time for a new Caesar to revive the American spirit has dawned."

While the Texas-based group is not believed to have been involved in any violence, just a plastering of flyers at events and locations in states across the country, including Flint, Ann Arbor and Washington D.C., it is known to be a splinter group from Vanguard America, which gained significant attention after it was revealed that James Alex Fields had marched with them in Charlottesville, Virginia last August before being arrested on murder charges for the death of a protestor.

Livingston Diversity Council President Nicole Matthews-Creech tells WHMI it’s important for the public to know this was not motivated by any Howell-based group. She says with race and culture being as tumultuous as it is today, it is an issue and something the community should be aware of. She says it’s also nice to know that this is nothing being perpetuated by anyone in the community because it is something everyone has been trying really hard to fight against.

Matthews-Creech says out of crisis comes opportunity and there are a lot of people who are upset and feeling angered or defeated by the incident, but what they can do is use that anger to create positive change, which is the goal of the Diversity Council. The council is said to be undergoing a re-birth and anyone wanting to get involved can find out more on their website, a link for which is posted below. (JM/JK)