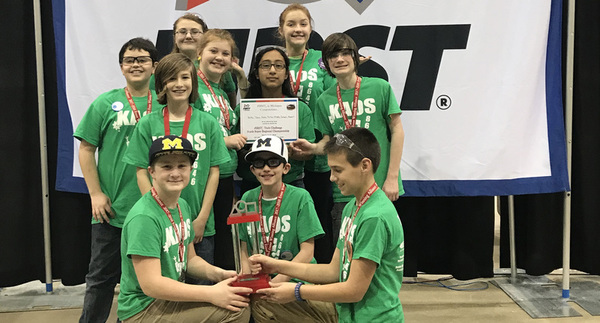 Howell Public Schools has made robotics clubs official in all elementary and secondary schools.

The Board of Education met last week and approved increasing district support for the FIRST or For Inspiration and Recognition of Science and Technology robotics clubs.. The move expands the clubs, making them available in all elementary and middle schools with a goal of inspiring young people to be science and technology leaders and innovators. The mentor-based programs build science, engineering and technology skills. There are a few elementary and middle schools programs operating already but the board approval aims to increase access by intentionally putting formal clubs at each elementary building and middle school with district sponsored support.

Superintendent Erin MacGregor tells WHMI it’s a great investment and a “game changer” for the district, saying it’s been a valuable program with high interest. He says the program has worked well on smaller scale and the expansion district wide will be great for kids. MacGregor noted all of the teacher and parent support, which has built the foundation for the FIRST Robotics Clubs. He says a staff advisor will be working closely with parents but the district will also be taking steps to put some resources behind the program, because it has been all fundraising and parental support in the past. Board member Greg Gilligan abstained from the vote as he’s involved with the program. He noted there has been tremendous growth in enrollment and stressed the need to provide some support.

Team KAOS (pictured) is one of Howell’s FIRST Tech Challenge teams and claimed a state championship title. They will now advance to the FTC Super Regionals event this March in Cedar Rapids, Iowa. The team is expected to be honored during the next Board of Education meeting on January 22nd. Howell’s other FTC team, Team KILTS, finished the qualifying rounds in fourth place and was also selected to compete in the division quarterfinals as part of an alliance. (JM)