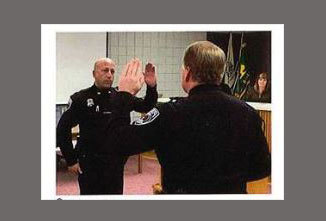 The Milford Police Department has promoted two staff members to leadership positions and a third to officer rank.

Scott Tarasiewicz has been elevated to the rank of Lieutenant within the department and will take command of the Road Patrol along with other administrative duties. Tarasiewicz joined the Milford Police in 1999, serving as a patrol officer until being assigned to the Detective Bureau in 2004. In 2010 he was promoted to Sergeant and began splitting assignments between supervising investigation and Road Patrol.

Officer Edward Pilch has been promoted to Sergeant and has been assigned to the Road Patrol. Pilch joined the department in 2000 as a reserve officer, was hired full time in 2004, and has spent 5 years as in integral member of the Detective Bureau.

Finally, Alex Durphey has been promoted to full time officer. Durphey spent last October through December attending the Oakland County Police Academy where he was selected as a platoon leader and graduated with a test average of over 96%. By being promoted to full time officer, Durphey has become the first person hired by the Milford Police Department who was sponsored by the Police Academy in over 75 years.

Chief Thomas Lindberg said the competition for these positions was intense, and that he looks forward to seeing the officers grow into these new positions. (MK)