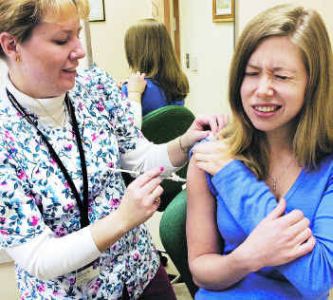 Multiple cases have been reported locally and the Livingston County Health Department is reminding residents that it isn’t too late to protect themselves from the flu. Local health officials say getting a flu shot isn’t only about helping yourself, but also the people around you. The flu is a contagious respiratory infection of the nose, throat, and lungs caused by the flu virus. The Livingston County Health Department says symptoms normally last two to seven days and include headaches, muscle aches, runny nose, and sore throat. In severe cases, the flu can also affect a person’s lungs and ability to breathe normally. A fever is almost always present and the cough is often severe.

Flu season runs from October through the month of April, but now with so much more international travel, there are actually cases of influenza reported year round according to Livingston County Medical Director Dr. Don Lawrenchuk. There has been talk that the vaccine isn’t as effective as some others, which he says is true. Lawrenchuk says the virus mutates from year to year so it’s very difficult to predict with 100% certainty which strain will be circulating in a community. For the past several years, he says the vaccine has been anywhere between 40-60% effective in preventing disease but even in cases where the disease is not prevented, the vaccine can still reduce symptoms significantly.

The Health Department and the Centers for Disease Control and Prevention recommend everyone age 6 months or older consider getting the flu shot. The Health Department offers the vaccine at their offices at 2300 East Grand River in Howell during Wednesday clinics. Flu shots can also be administered through local healthcare providers and pharmacies. Details are available through the link. (JM)