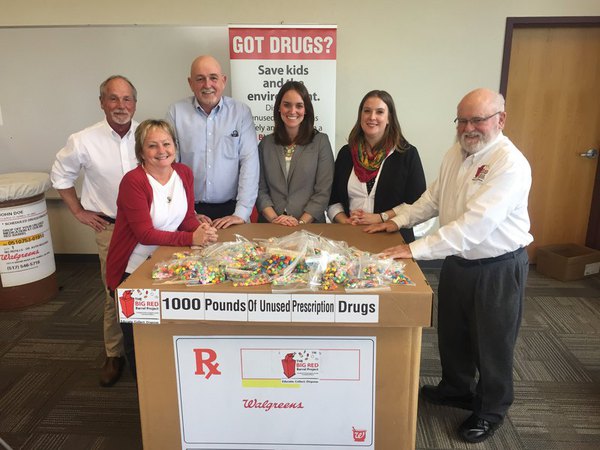 Connecting with the community is just one of the many things the Livingston County Community Alliance (LCCA) has been up to lately.

The LCCA is a county-wide coalition that works to reduce substance abuse through several different facets. Group members shared some of the nonprofit’s latest efforts with the community at a meet and greet event at the Judicial Center in Howell Thursday. Among those efforts is a project in which the LCCA is working with Fowlerville and Pinckney students to develop youth-led drug prevention activities. The project is funded by a $125,000 grant the LCCA was recently awarded and will be receiving every year for the next five years.

Another successful venture is the Big Red Barrel program. The LCCA distributes the red barrels throughout the region which serve as disposal bins for unwanted prescription medications. The LCCA celebrated a big milestone for the program at Thursday’s event- over 10,000 pounds of pills has been collected since implementation.

Program leaders also announced Wednesday that the Big Red Barrel is partnering with the St. Joseph Mercy Health System. Volunteer Don Root says they’ll begin by placing a barrel at St. Joseph Mercy Livingston in Howell. Root says he’s excited for the program to have this opportunity, noting the possibility of expanding into other hospitals. St. Joe’s is part of the Trinity Health system, which has 93 hospitals across the country.

Root says placing a barrel at the hospital will be effective because of its convenience for people who are coming in and out of the building with medications. However Root says the real help will come from the medical community broadcasting the barrel option for pill disposal. Root believes that added support will help keep more prescription medications off the street. (DK)