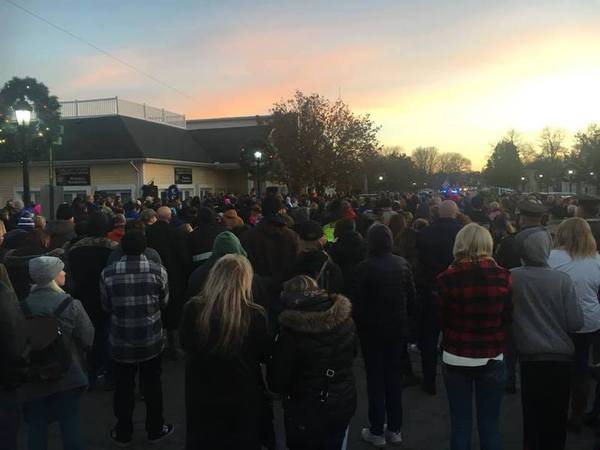 About 500 people turned out Sunday for a candlelight vigil and ribbon-tying memorial for an Oakland County Sheriff’s deputy, killed in the line of duty Thanksgiving Day morning.

Deputy Eric Overall was trying to disable a motorist being pursued by deputies from Lapeer County when he placed “stop sticks” across M-15 in Brandon Township shortly after midnight. However, the suspect, 22-year-old Christopher Berak, reportedly drove off the road and struck Overall, who later died from injuries. Berak was arrested at the scene and later charged with first-degree premeditated homicide and murder of a police officer, both felonies carrying life prison sentences. He remains held at the Oakland County Jail.

Overall’s widow Sonja said her husband had put extra effort in reaching out to youth following the sudden death one of his sons from a previous marriage. The couple just had married in June. Visitation is scheduled from 3-8pm today at the Mt. Zion Church in Independence Township. Overall's funeral will be held at 11am Tuesday, followed by a private procession for family and Oakland County Sheriff’s Office members. Picture courtesy of the Oakland County Sheriff's Facebook page. (JK)