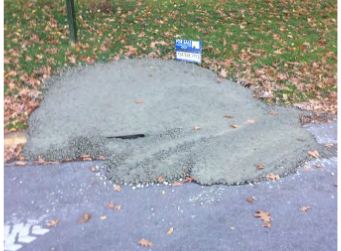 A company that dumped wet concrete down a storm drain in Hamburg Township will be receiving a bill from the municipality to cover the cost of cleanup.

Township officials say they were perplexed as to how an employee of Hornet Concrete Co. Inc. dumped the material down a storm drain on November 6th. Township Supervisor Pat Hohl says residents noticed a “large amount of concrete” blocking a storm drain in their subdivision near the intersection of Brighton Lake Road and Edinborough Drive. A complaint was made to the Hamburg Township Police Department, who in turn contacted the Fire Department.

However, Jeff LaChance, owner and CEO of Hornet Concrete, tells WHMI that the cement was not intentionally placed down the drain, but instead accidentally spilled out from a truck that had to make a sudden stop. "When in route to the site where the concrete was to be poured, the driver came around a somewhat blind curve in Brighton Lake Road to find a car stopped in the left hand turn lane that he was to use, and had to apply the breaks rather hard, as you know, concrete is a liquid load and sloshed forward and out of the barrel, the truck being on a downhill slope did not help." He says it's not a situation that happens often, but when it does, their drivers are instructed to move to the side of the roadway to minimize roadway spillage.

Hohl says the drain was “almost totally plugged”. Residents attempted to shovel away as much of the concrete as they could until the fire department arrived. Fire Marshal Jordan Zernick quickly responded to the report and found the concrete was in the process of setting. Using a high-pressure fire hose, he was able to blast the concrete out and dislodge it to open up the drain before the material hardened. After removing the storm drain cover, a large amount of concrete was found to be blocking a discharge pipe, which was also blasted with the hose and cleared.

After it was determined the material had come from Hornet Concrete, a company dispatcher told Hamburg Township Police a crew had been on location cleaning up from the previous day’s work. Fire Chief Mark Hogrebe asked the township to invoice the company on behalf of the fire department to recover costs associated with the use of their services. On Tuesday, the township’s Board of Trustees unanimously voted to send the invoice, which is in the amount of $365. The invoice will serve in place of a fine, as Hohl says the township does not have the mechanisms to ticket the company, and any litigation would be far more expensive than the cost to resolve the problem.

LaChance says it is unfortunate the driver did not see the storm drain, and that much to his disdain, the office was not notified immediately of the spill. "When we were notified, we dispatched a clean up crew at that time, unfortunately it was the next day and the township fire department had already been dispatched. Upon arriving at the spill, we found a large lump of concrete up on the grass away from the storm drain, I personally was on the clean up crew, and cleaned the spill to the best of our ability, not knowing concrete had reached the storm drain." LaChance says Hornet Concrete "...would never intentionally dump wet concrete into any roadway drain or runoff area, and are always mindful of our wash-down sites." (DK/JK)