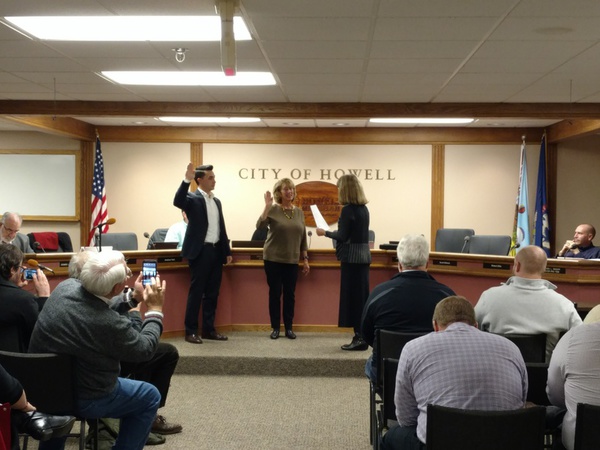 Newly elected Howell City Council members have been sworn in.

Mayor Nick Proctor and Councilwoman Jan Lobur were re-elected in the November General Election, along with newcomer Andrew Yost, who replaced incumbent Jeff Hansen. All three were sworn in during Monday night’s City Council meeting. Yost is a Howell native, local business owner and active community volunteer. Mayor Proctor welcomed Yost and went through the general process of how meetings proceed for his benefit.

Proctor told council he’s looking for no political rancor and wants to avoid the drama that comes out of Washington every day and occasionally, Lansing. Proctor commented there is no “R” or “D” behind anyone’s names and he thinks council has been very successful the last couple years and works well together as a team –adding there’s no partisanship and everyone sees the issues clearly. Proctor says council still has much strength in diversity of thought and is looking forward to that continuing in managing the affairs of the city.

Meanwhile, Mayor Pro-Tem Steve Manor was re-appointed to that position in a unanimous vote. Mayor Proctor also took time during the meeting to highlight the work of former Councilman Hansen, noting his many contributions and services to the citizens of Howell. Proctor said Hansen will be missed and told council he tried to entice him to consider serving on future boards or commissions and that Hansen was receptive. (JM)